Europe unites against cannabis in Istanbul

Europe unites against cannabis in Istanbul

In an effort to fight against drugs European leaders meet in Turkey, one of Europe's major drug traffic hubs, to advocate a cannabis free world. The current international debate on cannabis zoomed in on Turkey, when last week European mayors and municipal leaders combating drug abuse gathered in Istanbul to lobby the U.S. government to continue its fight against the legalization of cannabis and discuss the
challenges that drugs pose to their cities. Turkey, straddling Asia and Europe, is a drug trafficking hub due to its strategic location on the 'Balkan Route' on which drugs are transported from Afghanistan to Europe, but also on the 'Synthetics Route' bringing synthetic drugs, such as amphetamines and ecstasy, produced in Europe to Saudi Arabia. Last year the Turkish Police confiscated 23,884 kilograms of
cannabis. Heroin confiscations came in second at 10,312 kilograms according to figures in the 2006 Report on Drugs and Organized Crime by the Turkish Ministry of Interior (KOM). The amount of hashish seized in Turkey between 2004 and 2006 increased by 63 percent. John Walters, director of the White House Office of National Drug Control Policy (ONDCP), told the Turkish Daily News that Turkey's
relationship with the United States in the fight against drugs has been outstanding. He hailed the efforts of the Turkish government to harmonize anti-drug legislation with international laws. "This allows us to use as many of the law enforcement tools in the world as we can to fight against drugs ... Turkey is a story of amazing success," he said. However, Tomas Hallberg, Director of European Cities Against Drugs (ECAD), told the TDN that there was a real risk of a drug epidemic in
Turkey because it is a transit country. "There will be a drug market in Turkey and the level of drug users can rise," he said. Hallberg sited the example of Pakistan which for a long time was just a drug conduit without a real illegal drug consumption problem, and now is struggling with increasing drug abuse cases. Cannabis is the most widely used drug among teenagers. After cigarettes and alcohol it is the most common introductory substance to a life of addiction as it changes the wiring of the human brain. When asked if the harmonization of laws with the European Union had
improved the drug forecast for Turkey Hallberg said: "The EU has a long way to go in the fight against drugs. You cannot say there is an EU policy against drugs," explaining that this was due to the varied laws in different countries. The United States drug czar John Walters accused the Soros Foundation of undermining the policies of anti-drug organizations by funding a worldwide campaign to legalize
cannabis claiming it is not worth fighting against.

USA: Rosenthal trial begins. The lawyer for marijuana advocate Ed Rosenthal pushed as far as she could Tuesday against a judge's edict to keep the subject of medical marijuana out of his retrial on federal cultivation charges, trying to let jurors know that  Rosenthal was growing cannabis for sick patients. Defense attorney Shari Greenberger began her opening statement in federal court in San Francisco by addressing jurors as "fellow Californians,'' a less-than-subtle reminder that state voters legalized marijuana for medical use in 1996. She later acknowledged
that "this is a federal case brought by the federal government. There are certain areas where we cannot go.'' Greenberger said, "Mr. Rosenthal is a scientist and the government will attempt to suppress his ideas. ... For the past 40 years, my client, Ed  Rosenthal, has been a proponent of marijuana advocacy and reform, and that is why we are here.'' Her opening statement drew repeated objections from the
prosecution, and U.S. District Judge Charles Breyer told the jurors they were there to decide whether Rosenthal was guilty of growing marijuana, not to draw conclusions about why the government was prosecuting him. For his part, Assistant U.S. Attorney George Bevan described the case as a straightforward prosecution for marijuana
cultivation. He reminded the jurors in his opening statement that they had promised to apply the law according to Breyer's instructions. Rosenthal, 62, an authority on marijuana cultivation and writer of numerous books and magazine articles on the subject, was arrested in 2002 and charged with growing thousands of plants in an Oakland warehouse for patients at a San Francisco dispensary. He was convicted in 2003 but sentenced by Breyer to only one day in jail, which he had already served. The trial is expected to last about two weeks. 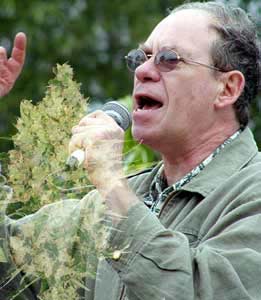 "The "guru of ganja" Ed Rosenthal presently has to survive his hopefully last court trial - his chances are good."