Norwegian police have made a number of marijuana grow operation arrests this year, according to the Oslo newspaper Aftenposten. Gardens busted on Krakeroy Island, near Fredrikstad, and Kongsberg in Buskerud over the weekend were just the latest indications that cannabis cultivation is taking off in the land of the Norse. Those two raids were the fourth in a week, and the 14th and 15th in recent months in southern Norway. Other garden busts have occurred in Telemark, Buskerud, Hedmark, and Ostfold counties. Many of the busts have involved Vietnamese growers, according to police. Police believe many of the grow ops are linked, and the national crime unit, Kripos, has been called in to aid local investigators. "We've noticed that many of these cases bear similarities," said Kripos spokesman Atle Roll-Mathiesen. "We've gotten involved, to look at the links between them." Scandinavian countries generally have tough drug policies, and Norway's drug laws are no exception. While small-time drug possession, including marijuana possession, is charged under a relatively lenient section of the Norwegian criminal code, drug cultivation or trafficking offenses, including those involving marijuana, are serious crimes punishable by up to 21 years in prison. 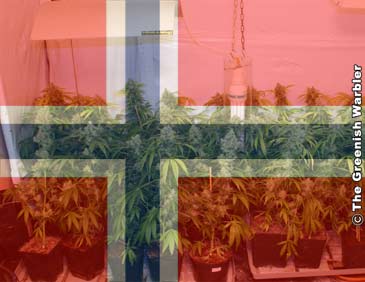 USA/California: Bil would protect medial pot users’ jobs. A new Assembly bill with two Bay Area co-authors seeks to protect medical-marijuana users' jobs. AB 2279, introduced Wednesday, would prohibit employment discrimination against those who use marijuana as medicine in compliance with state law away from the workplace.  It would leave intact already-existing provisions barring consumption in the workplace, and would protect employers from liability by carving out an exception for safety-sensitive jobs. Assemblyman Mark Leno, D-San Francisco, had vowed to introduce such a bill last month after the state Supreme Court ruled 5-2 that an employer can fire a worker solely because he or she uses medical marijuana outside the workplace. "AB 2279 is merely an affirmation of the intent of the voters and the legislature that medical marijuana patients need not be unemployed to benefit from their medicine," Leno said in a news release issued Thursday. The bill is co-authored by Assemblywomen Loni Hancock, D-Berkeley; Patty Berg, D-Eureka; and Lori Saldana, D-San Diego.  It's sponsored by Oakland-based Americans for Safe Access, a national nonprofit which had argued for the plaintiff in the state Supreme Court case decided in January. "Despite the ill-conceived ruling by the California Supreme Court, the intent of state legislatures has been to recognize the civil rights of patients and to offer them reasonable protections," ASA spokesman Kris Hermes said Thursday. ASA says companies that have fired medical-marijuana users, threatened their jobs or denied them jobs include Costco, UPS, Foster Farms Dairy, DirecTV, the San Joaquin Courier, Power Auto Group and several construction companies, hospitals, and trade union employers. Similar bills have been introduced in Oregon and Hawaii.

Great Britain: A poll conducted last month by the Angus Reid Global Monitor found that a plurality of Britons -- 41%--believe people caught possessing marijuana for their personal use should face the penalties associated with Class C drugs. Another 27% said marijuana possessors should face no penalty at all. Under the Misuse of Drugs Act, possession of Class C drugs (marijuana, tranquilizers) is punishable by up to two years in prison, possession of Class B drugs (amphetamines, barbiturates) garners up to five years, and possession of Class A drugs (heroin, cocaine, methamphetamine) is worth up to seven years. Marijuana was down-scheduled to Class C in 2005, but the Labor government of Prime Minister Gordon Brown is hinting broadly that it will reschedule it back to the more serious Class B in the near future. But according to the Angus Reid poll, while 68% of respondents favored either the status quo or some form of decriminalization or legalization, only 13% supported treating marijuana possession as a Class B drug offense, and only 11% supported subjecting pot smokers to the seven years in prison associated with Class A drugs. Nine percent of respondents had no clue. Oddly enough, Angus Reid itself spun the poll results as suggesting support for a tougher line on marijuana. "Most Britons Want Jail for Marijuana," read the headline of its release. While that headline is factually accurate -- 65% think marijuana possession should be punished as a Class A, B, or C drug offense -- it is misleading because a plurality supports the status quo -- not an increase in penalties -- and a sizeable minority supports having no penalties at all.

USA/New Hampshire: A New Hampshire bill that would decriminalize the possession of small amounts of marijuana hit a bump Tuesday when the House Criminal Justice and Public Safety Committee gave it a thumbs down. But despite the committee vote, the bill is not dead and will be the subject of an expected roll-call vote on the House floor. The move was especially disappointing coming after a subcommittee of the Criminal Justice and Public Safety Committee approved it on a 3-1 vote last week. But even that vote had resulted in a scaling back of the original proposal. Instead of the original one ounce cut-off point, the subcommittee voted to make it one-fourth of an ounce. HB 1623 would reduce the penalty for possession of small amounts of marijuana from a Class A misdemeanor with possible jail time to a violation punishable by a maximum fine of $200. Sponsored by Reps. Jeffrey Fontas (D-Nashua), Andrew Edwards (D-Nashua), and Charles Weed (D-Keene), the bill has garnered strong public support, but also loud law enforcement opposition. Eleven states have decriminalized marijuana possession, including New Hampshire neighbours Maine and New York. The Vermont Senate passed a similar measure last week.