The Czech Republic will decriminalize the possession of up to 20 joints, a gram of hashish, or up to three marijuana plants, according to a report from the Czech news site iDNES. Under Czech law, possession of "more than a small amount of drugs" is a criminal offense punishable by up to five years in prison. But Czechs are among the most prolific of European pot-smokers, and pressure has been mounting for years for an adjustment in the law. Now, the vague "more than a small amount" has been codified. Also included in the decrim measure is possession of up to a half-gram of methamphetamine. "Several European countries have similar rules. It is good to say somewhere that you will not face prosecution for a single hemp plant," Viktor Mravčík, head of the Czech National Focal Point for Drugs and Drug Addiction, told iDNES. This change in the Czech penal code will bring the law into line with prevailing practice. According to Czech police, who had issued their own limits on minor drug possession (which were ignored by the courts), only about one-fifth of people caught growing marijuana plants were prosecuted in 2006. The rest only paid fines. "We already have our own criteria on what we consider a crime," Břetislav Brejcha, an officer at the national anti-drug headquarters NPDC, told iDNES. The police limits "are quite similar to the new regulation, therefore we don't mind it at all," Brejcha added. 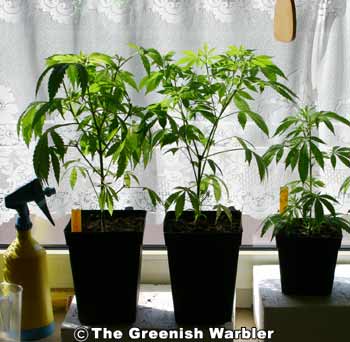 USA: Big Surprise - New Hampshire house passes decriminalization bill. In a vote that caught most observers by surprise, the New Hampshire House of Representatives approved a scaled-back marijuana decriminalization bill by a margin of 193-141. To become law, the measure must still pass the state Senate, where it will receive a cool reception, and be signed by the governor, who has signaled his opposition to it. Sponsored by Reps. Jeffrey Fontas (D-Nashua) and Andrew Edwards (D-Nashua), the bill, HB 1623, would make possession of up to a quarter ounce of marijuana a violation punishable by a maximum $200 fine. Currently, small-time possession is a misdemeanor punishable by up to a year in jail and a $2,000 fine. The favorable vote came despite the bill's rejection by a House policy committee and the opposition of law enforcement officials. Among arguments raised by proponents was that young offenders would be unfairly punished by having a marijuana offense on their records. The New Hampshire Coalition for Common Sense Marijuana Policy, which has led the lobbying charge for the bill, praised the House and urged the Senate to act. "Our representatives in the House did the right thing for New Hampshire - and especially for New Hampshire's young people," said the coalition's Matt Simon. "It's time for the Senate to finish the work we've started here and bring some sanity to our marijuana sentencing policies."

USA: Alaska Supreme Court takes up marijuana issue again. An effort to recriminalize marijuana is in the hands of the Alaska Supreme Court after the high court heard oral arguments Thursday. The latest round in a decades-old battle over the drug revolves around a 2-year-old state law that would make illegal the personal at-home use of small amounts of marijuana in Alaska. A lower court struck down part of the law two years ago saying it conflicts with past Supreme Court decisions. The state Department of
Law appealed the case. This week special assistant attorney general Dean Guaneli reprised his argument that the new law contains findings by the Legislature on the dangers of marijuana that were not considered by the court in the past.  The court is expected to rule on the case within a year. The justices could remand the case back to the lower court for trial.

USA: The U.S. government believes that America is going to pot - literally. Earlier this month, the U.S. National Institute on Drug Abuse announced plans to spend $4 million to establish the nation's first-ever "Center on Cannabis Addiction," which will be based in La Jolla, California. The goal of the center, according to NIDA's press release, is to "develop novel approaches to the prevention, diagnosis and treatment of marijuana addiction."