Obeserving the world of cannabis

EU - Cannabis is less dangerous than alcohol or tobacco, according to a major review published by the EU drugs agency. The report said most users cease smoking cannabis by their late 20s or early 30s and that the vast majority did not experience any negative effects. "On every comparison of dangerousness we have considered, cannabis is at or near the bottom in comparison with other psychoactive substances," said author Robin Room, in an analysis contained in a 700-page EU report on cannabis.

The report, A Cannabis Reader: Global Issues and Local Experiences, was published yesterday by the European Monitoring Centre for Drugs and Drug Addiction to coincide with international day against drug abuse and illicit trafficking. Mr Room examined a range of research on the health effects of legal and illegal drugs, which compared the substances based on dangerousness or harm, degree of intoxication and dependence. These found:

Mr Room said the current international restrictions on cannabis were "too harsh", compared with the greatly under-regulated systems for
alcohol and tobacco. In a separate analysis on the health impact of cannabis, researcher
John Witton concluded: "Most cannabis users cease smoking cannabis by their late 20s or early 30s and the vast majority do not experience any adverse effects." He said a minority continue their use and that long-term heavy users reported negative health effects.

Austria - The Agency for Health and Food is allowed now to cultivate cannabis for medicinal purposes and under supervision and control of the Health Ministry.

This is made possible by an amendment of the narcotics law, approved by the Health Committee. This change allows the cultivation of cannabis for the production of substances for the manufacturing of medicinal drugs.

America has the highest use of cannabis worldwide.
USA - A survey of 17 countries has found that despite its punitive drug policies the United States has the highest levels of illegal cocaine and cannabis use. The study, by Louisa Degenhardt University of New South Wales, Sydney, Australia) and colleagues, is based n the World Health Organization's Composite International Diagnostic nterview (CIDI). Cannabis use was highest in the US (42.4%), followed by New Zealand (41.9%).

In the Americas, Europe, Japan, and New Zealand, alcohol had been used by the vast majority of survey participants, compared to smaller proportions in the Middle East, Africa, and China. Drug use "does not appear to be simply related to drug policy," say the authors, "since countries with more stringent policies towards illegal drug use did not have lower levels of such drug use than countries with more liberal policies." In the Netherlands, for example, which has more liberal policies than the US, 1.9% of people reported cocaine use and 19.8% reported cannabis use. Data on drug use were available from 54,068 survey participants in 17 countries.

Parliament debates proposals for medical use of cannabis.

Germany - On 26 June, the German Bundestag (lower house of parliament) debated two similar proposals re. the medical use of cannabis submitted by the Green Party and "The Left", respectively.
Speakers from all 5 parties represented in the Bundestag and the federal drug commissioner Sabine Baetzing (Social Democrats) participated.

On 15 October 2008 the Health Committee of the Parliament will hold a public expert hearing on the subject. Speeches by Detlef Parr (Free Democrats), Monika Noche (The Left) und Dr. Harald Terpe (Green Party) included clear demands for improvements to the access to cannabis medicines and an end to criminal prosecution for the severely ill. "We have to help the victims by establishing legal security" Mr. Parr explained. The two representatives of the Social Democrats (Dr. Marlies Volkmer, Sabine Baetzing) showed compassion and understanding for the suffering of the patients but fell short of offering changes to the law. 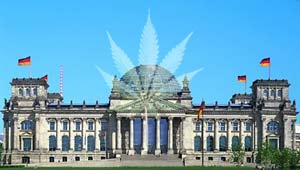 Germany: Parliament debates proposals for medical use of cannabis.

The representative of the Christian Democrats, Maria Eichhon largely missed the topic and emphasized the dangers of cannabis consumption for minors. "None of us doubts that for many people cannabis is a helpful medicine" stated Ms. Blaetzing on behalf of the federal government. But she pointed out that a change in law to the benefit of patients is currently not an option because "the medical benefits of cannabis, except for the use of dronabinol in certain indications, had not been proven conclusively." Thus, the Federal Institute for Pharmaceuticals and Medical Products would continue to evaluate the safety of the therapeutic use of cannabis on a case-by-case basis, even though the application process for all involved is considerably more demanding than the prescription of a narcotic and could "hardly be expected" of the patients. So far, the Institute, an arm of the Federal Ministry of Health, has issued permits to use cannabis to 10 patients and
rejected 32 applications.