Elections in the Netherlands: Will “Groen Vrij” take over the power?

This week, on 22 November, the next parliament elections in the Netherlands will be held. Amongst many other topics, also the cannabis issue is up for election – will the government get one in the eye also because of its repressive cannabis policy? With the “Groen Vrij” party (http://www.groenvrij.nl/), for the first time there is a party up for election that focuses its agenda on the decriminalization (in the first step) of cannabis. One of its postulations is that every Dutch citizen should be allowed to grow ten plants. Party founder and living Dutch cannabis legend Wernard Bruining hopes that many of the one million Dutch cannabis friends will vote for Groen Vrij. Bruining has prominent campaigners at his side, amongst others Simon Vinkenoog, a wellknown Dutch poet and Cees Hendricks of No Mercy Supply, who had recently been released from jail some months before his official penalty of two years had ended – under the sanction of social work, and “Spees Cees” was allowed to do this social work as a volunteer in the Groen Vrij Party! Last week, from a plane Groen Vrij airdropped 250.000 flyers over the city of Amsterdam what brought the party much attention in the media. Well, hopefully every Dutch cannabis fan knows which party he has to choose on Wednesday… 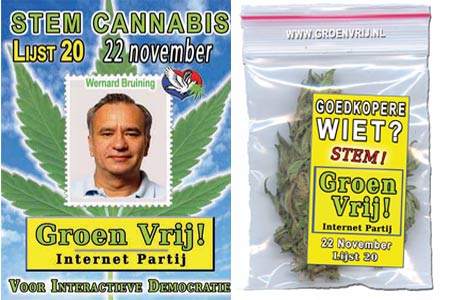 And now let`s press our thumbs that Groen Vrij will make it into the parliament...

Famous economist Milton Friedman has died at the age of 94. His theories, premised on less government interference, low taxes, and the promotion of economic freedoms, won him the Nobel Prize for Economics in 1976. Friedman was also known as a strong supporter of the legalization of cannabis and  has donated millions of dollars to marijuana lobby groups. In 2005, Milton Friedman and 500 economists called for debate on marijuana prohibition in the USA, claiming that a legalization could save 6 billion dollars.

Italy: 40 joints legal for personal use. Italy's Government has doubled the amount of cannabis people can possess without risking prosecution and announced a major overhaul of the laws on narcotics use. Causing an outcry from the centre-right opposition, but joy from campaigners for drugs liberalisation, Health Minister Livia Turco said the maximum amount of marijuana to be considered for "personal use" would be doubled to 1g in terms of its active ingredient. That would allow for possession of up to around 40 joints, the Health Ministry said. "I intervened so thousands of young people don't have to go to jail or suffer a criminal proceeding for smoking a joint," said Turco, a member of the largest Government party, the Democrats of the Left.

San Luis Obispo (USA): The county now has a medical marijuana identification card program, after the county Board of Supervisors has given its final OK. A 2003 state law requires counties to issue cards to qualified medical marijuana patients and their primary caregivers. Their names then go into an online registry that law enforcement officers can use to verify an ID card's validity. Supervisors voted unanimously without any discussion to create an ordinance that establishes a $78 fee for the ID program, which will pay for the program. People with Medi-Cal benefits will be charged $39 for an ID card. The program is up and running through the county Public Health Department. The program limits the amount of marijuana a person can have at one time to 8 ounces, six mature plants or 12 immature plants. San Luis Obispo County is the 21st in California to issue the cards. Neighboring Santa Barbara and Kern counties already do. San Luis Obispo County currently has one marijuana dispensar operating in Morro Bay.