Elections in the Netherlands: No seat for Groen Vrij

The newly founded cannabis party Groen Vrij unfortunately could not gain any seat in the Dutch parliament. The elections last week confirmed the reigning CDA as strongest party, so one has to fear that the pressure on the cannabis branch will be continued. One day before the election, Minister of Justice Hirsch-Ballin had surprisingly ruled that Cees Hendricks (see last week`s news) has to return to jail – “De Koepel” in Arnhem - for another nine days. Obviously Hirsch-Ballin with this decision reacted upon the bad media coverage on the fact that a former cannabis dealer was allowed to do his social work in a “legalize it” party and that Amsterdam had been bombed with 250.000 Groen Vrij flyers. 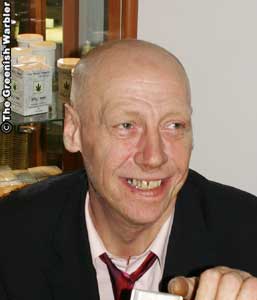 Hirsch-Ballin forced Cees Hendricks to return to jail for another nine days.

San Francisco: The Board of Supervisors gave final approval Tuesday to legislation
that would set most marijuana-related crimes as the lowest law enforcement priority for the San Francisco Police Department. The board voted 7-3 to approve the legislation, sponsored by Supervisor Tom Ammiano. Under the legislation, the city's police force would be directed to essentially ignore most marijuana offenses
unless the crimes involve minors, acts of violence, sales on public property or driving under the influence. Police officials have said the legislation is consistent with department policy.

The 19th High Times Cannabis Cup in Amsterdam is over. The biggest surprise was that Japanese Breeder Big Buddha could gain 1st place in the Indica Cup and 3rd place in the Sativa Cup, drawing the scene`s attention to the fact that the are also many cannabis friends in Japan that are growing and breeding a lot.

The Netherlands: The governments of Canada, Germany and Italy are interested in medical cannabis from the Netherlands. According to a letter by Mr. H. Hoogervorst, the Minister for Health, Welfare and Sport of the Netherlands, to the Dutch Parliament of 31 October the Canadian, the German and the Italian governments are interested in medical cannabis produced under supervision of the Health Ministry and sold in pharmacies of the country for distribution to patients in their countries. In his two-page letter Mr. Hoogervorst described the current situation of the medicinal cannabis project and noted that it will continue for at least one more year. Under certain  circumstances, it may continue for another four years. This decision was based on a plan on the development of medicines by a consortium of Dutch companies and on an application for registration by GW Pharmaceuticals for Sativex. It is also important that in the future the costs of the project do no longer exceed the revenues as is currently the case. So far, less patients than expected buy cannabis from the pharmacies. Additional revenues came from national and foreign companies who bought the plant material for isolation of THC and development of pharmaceutical products. In addition, the Canadian, German and Italian governments expressed their interest in buying Dutch medical cannabis for their patients. Higher revenues from patients and governments or companies would also allow to reduce the price of the pharmacy cannabis for Dutch patients, the minister stated in his letter.

Science: Evaluation of herbal cannabis by medical users in controlled study. Canadian researchers conducted a controlled crossover trial of 4 different herbal cannabis preparations among 8 experienced and authorized cannabis users with chronic pain. Preparations were varied with respect to particle size, THC content and humidity. Subjects received each preparation on a separate day and prepared the drug in their usual way. They were asked to evaluate the products based on appearance (smell, colour, humidity, particle size, ease of preparation and overall
appearance) and smoking characteristics (burn rate, hotness, harshness and taste). Particle size was defined as the size of the particles after grinding the raw herbal material. Seven subjects completed the study, and the product with highest THC content (12 per cent), highest humidity (14 per cent) and largest grind size (10 mm) was rated highest overall. Significant differences were noted between preparations on subjective ratings of appearance and colour. Researchers concluded that a "more acceptable cannabis product may increase recruitment and retention in clinical studies of medical cannabis." They noted that in September 2006 about 20 per cent of authorized cannabis users obtained herbal cannabis from Health Canada, compared to about 10 per cent in September 2004.