Oakland "Guru of Ganja" Ed Rosenthal was reindicted by a federal grand jury on a host of marijuana-related charges, roughly six months after an appeals court tossed out his earlier convictions. The superseding indictment filed Thursday contains 25 counts against Rosenthal, 61, and two of his original co-defendants, Kenneth Hayes and Richard Watts. Rosenthal faces 14 counts including conspiracy, use of a place to manufacture marijuana for distribution, manufacturing marijuana for distribution, laundering money from marijuana sales, and filing false tax returns. "I knew they had a grand jury but I didn't know what was going to happen," Rosenthal said Thursday night. "What they're trying to do with these indictments and with my continued persecution is to close down all of the dispensaries in California, to deprive people of their medicine. It's not the way I planned to spend my time for the next year but I'm resigned to it," he said, describing himself as an "everyman" who won't be cowed. "Most people considering their circumstances for one reason or another are forced to give in under the weight of government pressure. I'm not only standing up for dispensaries but for all these people who've been harassed and hounded by the government." 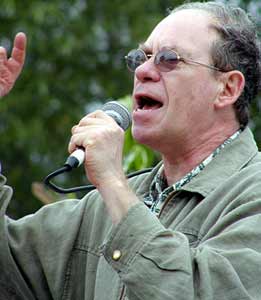 Ed Rosenthal will keep on fighting

Europeans are abandoning cannabis but turning to cocaine and drink, new figures from French customs reveal. According to a report by the Central Narcotics Office, after more than a decade of rapid growth, seizures of cannabis resin in Europe dropped by a fifth last year, to 831 tons. At the same time, seizures of cocaine grew by 15 per cent. The apparent trend is reinforced by British figures which show that the popularity of cannabis in the UK has plummeted, with 600,000 fewer people smoking or eating marijuana than three years ago. The Home Office statistics, released last week, also show that consumption of cocaine in Britain has risen.

Canada: New deal for federal pot grower. Prime Minister Stephen Harper may have decided the study of medicinal marijuana is a waste of money, but his government is still interested in selling pot. After gutting a $4-million fund destined to research the therapeutic properties of cannabis, the Conservatives recently extended the contract of Canada's only legal grow-op. As part of the new deal, Prairie Plant Systems Inc. will keep growing marijuana inside an abandoned mine shaft and sell it to the government for at least one more year. The Health Department did not disclose the terms of the contract. Spokesman Jason Bouzanis only confirmed that an extension of the contract was approved over the past few weeks. But in an e-mail exchange obtained by The Globe and Mail, Michel Raincourt, a senior director with the Public Works Department, wrote that the program had been extended until September, 2007.

Sixteen Italian politicians tested positive for cocaine or cannabis use in a trick drugs test carried out by a television satire show, the country's media reported today. The show tested 50 parliamentarians by applying what appeared to be make-up to their faces, telling them they were to appear in a debate on the country's budget, the ANSA news agency reported in a story soon taken up by other media. The make-up actually consisted of chemicals that could detect the presence of drugs in sweat on the participants' skin. It detected cocaine in four of the politicians and cannabis in 12.

Science: Scientists at the University of Mississippi receive 11 million dollars to research cannabis and other psychotropic plants. They plan to use a recently awarded grant from the National Institutes of Health of 11 million dollars (about 8.8 million Euros) to develop THC mini-patches and study the effects of cannabis and other plants in a new neuroscience research centre. The specific area of research stems around neuroscience as well as identifying certain  components and properties of natural products that affect the central nervous system, pharmacy professor Rae Matsumoto said.