San Francisco, USA: Federal prosecutors said Friday they would retry Oakland marijuana activist Ed Rosenthal on five counts of illegal cultivation charges - even though he will face no jail time if convicted. At a hearing, U.S. District Court Judge Charles Breyer demanded to know who in the Department of Justice made the decision to continue pursuing Rosenthal, whose original conviction was overturned last year. Rosenthal, 62, can't be sentenced to prison even if he is convicted because the 9th U.S. Circuit Court of Appeals upheld the one-day prison sentence ordered by Breyer in 2003. Newly appointed U.S. Attorney Scott Schools made the decision, said Assistant U.S. Attorney George Bevan, but he was not sure if Department of Justice officials in Washington were involved. The judge said the government's position to go forward left him no choice but to hold a trial, which he scheduled for May 14. "This isn't a criminal case, this is a political case," said Rosenthal, who appeared in court dressed in a blue wizard's robe with a golden marijuana leaf emblazoned over the breast. "I may as well get my money's worth and have a trial."

USA/New Mexico: As expected Governor Bill Richardson signed the medical
cannabis measure into law, so that the New Mexico became the 12th state of the US with a medical cannabis law. "This law will provide much-needed relief for New Mexicans suffering from debilitating diseases," Richardson said at the signing ceremony on 2 April.

Italy: Government wants to allow the use of cannabis-based medicines. The Italian Senate should approve "the new law proposal by the Italian government, that simplifies the medical prescription of all analgesic drugs, not only opioid-based drugs but also those containing cannabis derivatives, without delay." This is the solicitation of Health Minister Livia Turco, at the meeting "Rehabilitation activities: yesterday, today, tomorrow", held at the Leonarda Vaccari Institute in Rome on March 22. Asked a specific question on the use of cannabis derivatives for the treatment of pain by Andrea Pelliccia, neuropsychiatrist at the Sant'Andrea Hospital in Rome, the Minister replied: "You used a forbidden word", then specified: "I believe that pain therapy in certain pathologies is a measure of civility for our country. I would like to remind that the use of cannabinoids for pain is scientifically justified, so we should use everything available".

Studies: Heavy marijuana use doesn't damage brain. Long-term and even daily marijuana use doesn't appear to cause permanent brain damage, adding to evidence that it can be a safe and effective treatment for a wide range of diseases, say researchers. The researchers found only a "very small" impairment in memory and learning among long-term marijuana users. Otherwise, scores on thinking tests were similar to those who don't smoke marijuana, according to a new analysis of 15 previous studies. In those studies, some 700 regular marijuana users were compared with 484 non-users on various aspects of brain function - including reaction
time, language and motor skills, reasoning ability, memory, and the ability to learn new information. "We were somewhat surprised by our finding, especially since there's been a controversy for some years on whether long-term cannabis use
causes brain damage," says lead researcher and psychiatrist Igor Grant, MD. "I suppose we expected to see some differences in people who were heavy users, but in fact the differences were very minimal. However, there might be a different set of
circumstances to a 12-year-old whose nervous system is still developing."

Spain: Cannabis users on the rise. The number of teenagers in the province of Alicante who smoke cannabis is rising, as is the frequency with which they smoke the drug. More and more teenagers take the substance daily and, according to experts, that abuse will show in the next few years. The latest study showed that 40% of schoolchildren aged between 12 and 17 smoke 'spliffs' and 2% smoke them every day. Bartolome Perez Galvez, the head of the Addictive Conduct Unit at Hospital San Juan, speaking at the III Infant and Juvenile Psychiatry Conference last Friday, revealed the new statistics, adding that "the cannabis problem is more serious than that of any other drug, such as cocaine or other designer drugs." 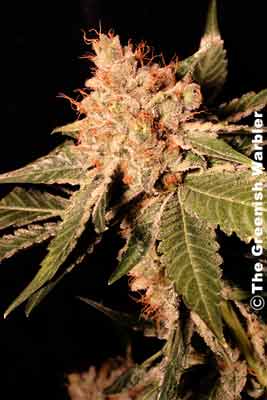 More and more teenagers in Spain are smoking buds like this.

Science: A study conducted in Tunisia with 149 lung cancer cases and 188 controls conducted by the International Agency for Research on Cancer in France found out that smoking tobacco was associated with a 4 to 17-fold increased risk depending on
dose. Smoking cannabis was associated with a 4-fold increased risk without a clear dose-response relationship.