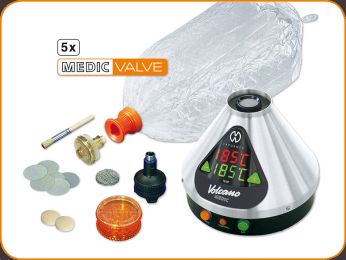 On the other hand, it allows for the inhalation therapy with cannabinoids directly from dried hemp flowers. (.) In the Volcano Medic Vaporization System the cannabinoids are solved (vaporized) by heat impact only. A combustion as it takes place while smoking does not occur." This avoids the formation of  noxious combustion products.

The head of the American Office of National Drug Control Policy, drug czar Gil Kerlikowske, is pushing a campaign targeting drugged driving and has singled out marijuana as a main problem. But if the latest research findings on stoned driving are any indication, the drug czar may want to shift his emphasis if he wants to (as he claims) let policy be driven by evidence.

According to clinical trial data published in the March issue of the Journal of Psychoactive Drugs, subjects tested both before and after smoking marijuana exhibited virtually identical driving skills in a battery of driving simulator tests. Researchers in the double-blind, placebo-controlled trial tested 85 subjects -- 50 men and 35 women -- on simulated driving performance. The subjects had to respond to simulations of various events associated with vehicle crash risk, such as deciding whether to stop or go through a changing traffic light, avoiding a driver entering an intersection illegally, and responding to the presence of emergency vehicles.

Subjects were tested sober and again a half hour after having smoked a single medium-potency (2.9% THC) joint or a placebo. The investigators found that the subjects' performance before and after getting stoned was virtually identical. "No differences were found during the baseline driving segment (and the) collision avoidance scenarios," the authors reported. Nor were there any differences between the way men and women responded. esearchers did note one difference. "Participants receiving active marijuana decreased their speed more so than those receiving placebo cigarettes during (the) distracted section of the drive," they wrote. The authors speculated that the subjects may have slowed down to compensate for perceived impairment. "[N]o other changes in driving performance were found," researchers concluded.

USA/Marijuana Legalization: California Tax and Regulate Has Eight-Point Lead in Latest Poll, But Still Under 50%

According to a Los Angeles Times/USC poll released Tuesday, the California Tax and Regulate Cannabis initiative has the support of 49% of voters, while 41% are opposed, and 10% are undecided. The figures are in line with other recent polls. Two weeks ago, an internal campaign poll had support at 51% and another public opinion poll had it at 49%.

The bad news for initiative supporters in the latest poll is that it needs 50% plus one vote to win, and it isn't there yet. The good news, however, is that the initiative only needs to pick up one out of five of those undecided voters to go over the top. Or, as Dan Schnur, director of USC's Jesse M. Unruh institute of politics put it: "The good news for proponents is that they are starting off with a decent lead. The good news for the opposition is that initiatives that start off at less than 50% in the polls usually have a hard time."

USA/Arizona: For the fourth time, the voters of Arizona will decide in November whether people with certain ailments should be able to legally use cannabis.

State officials confirmed that backers of the latest medical cannabis initiative had enough valid signatures on their petitions to be on the ballot. Arizonans have approved a similar measure twice. But that never took effect because of the way it was worded.

A tax on medical cannabis could generate some 400,000 US  Dollars (about 330,000 Euros) for the city over the next five years, according to an estimate from financial officials of the city.

The city council passed legislation earlier this year that permits residents with certain medical conditions to purchase cannabis.  Now the budget council members are expected to vote on June 15 includes a provision that would impose the city's 6 percent sales tax on medical cannabis sold in the city.

A municipal initiative that would legalize the possession of up to an ounce of marijuana by adults is headed for the November ballot. The Coalition for a Safer Detroit announced this week that the Detroit Elections Commission had certified its petitions.

The initiative would amend the city's controlled substance statute by adding the words: "None of the provisions of this article shall apply to the use or possession of less than 1 ounce of marihuana, on private property, by a person who has attained the age of 21 years." The coalition turned in more than 6,000 signatures to put the initiative on the ballot.

The initiative is now before the Detroit City Council, which has 30 days to pass it into law or it goes automatically before the voters in November. "We met the proper number of signatures and we met all the legal standards," initiative organizer and medical marijuana patient Tim Beck told the Detroit Free Press. "There will be no legal challenge to keep it off the ballot. I'm very confident. People in Detroit have a serious understanding that priorities need to be reordered in respect to law enforcement. We need to focus on violent crime and guns. We just can't afford this any longer."