Up and down: England`s Home Secretary John Reid has performed a dramatic U- turn on cannabis by slashing the amount of drugs a user can claim is for personal use rather than dealing. His predecessor in office Charles Clarke had caused an uproar before last Christmas when he suggested cannabis users should be allowed to carry a massive 14 ounces without being treated by police as a dealer. But leaked documents show that Reid now wants to set a far tougher threshold of one hundredth of that amount - around one sixth of an ounce - with drastic reductions in the levels for a range of other drugs. The proposed limit of one sixth of an ounce of cannabis, or five grams, would be among the toughest thresholds of any country in Europe. England, where are you heading to?

Better news once again from Switzerland. The pilot project on the controlled sale of cannabis in Bern is getting more concrete. At the beginning of June, the municipal council of Bern carried a respective motion by the Green Party with 38 votes for it and 22 against it. Health director Edith Olibet, however, underlined that for the beginning, all activities are serving the purpose of finding out what is possible from a legal point of view. According to Olibet, the municipal council is totally aware of the fact that such a project will only be possible with an exception granted by the Federal Government as well as scientific accompaniment. For sure there will be no solo attempt by the city of Bern, as feared by conservative Swiss politicians and organisations.

Also two good news items from the USA: South Dakota citizens will decide in November 2006 whether seriously ill patients may be allowed to use cannabis for medical purposes in the state. The measure to be decided on would allow qualified patients to possess up to six plants and/or one ounce (28.5 grams) of cannabis. Qualified patients must possess a physician's recommendation to use cannabis and must register with the state Department of Health. So far, eleven states have enacted similar laws. And in the coming months, the House of Representatives will vote on an amendment that would end the federal government's attacks on patients in states with medical cannabis laws. 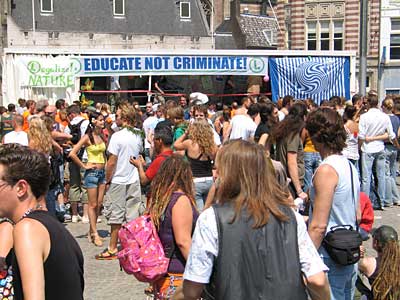 On 7 June, the 10th anniversary of the "Legalize" street parade in Amsterdam took place. About 2000 people enjoyed a great atmosphere, speeches were hold by e.g. Joep Oomen (Encod - Freedom to Farm), Willem Panders (PCN – Platform Cannabisdetaillisten Nederland) and others. 14 trucks with bands in four hours moved from the Dam to Station Slotervaart (West). While the people were demonstrating for legalization, the ESPAD (The European School Survey Project on Alcohol and Other Drugs) published highly interesting results of the Dutch drug policy: In the Netherlands, cannabis use among 15 to 16 year old youngsters is not as prevalent as e.g. in Ireland, England, France, Spain, Belgium or Slovenia. The Czech Republic is on top of the list, clearly leading in terms of lifetime and last year prevalence. This result once again supplies evidence that the protection of minors works very well in the Dutch coffee shops and that cannabis use is no longer that attractive and interesting for youths, if it is widely socially accepted and decriminalised, having lost its thrill then. 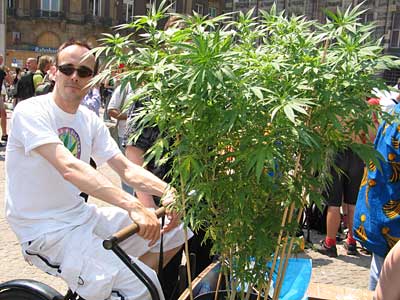 Finally some interesting scientific news: Italian researchers found that Cannabidiol (CBD) inhibits tumour growth in leukaemia and breast cancer in animal studies. CBD also reduced lung metastases deriving from human breast cancer cells that had been injected into the paws of the animals. At the Virginia Commonwealth University in the USA, scientists synthesized new cannabinoids that are soluble in water and therefore may be injected – this would mean a revolution in cannabis therapy.