The city council in the Danish capital city of Copenhagen voted overwhelmingly January 14 to ask the Justice Ministry for permission to implement a three-year trial program in which state-licensed marijuana outlets would sell small amounts of marijuana to city residents. But whether the proposal will go anywhere in Denmark's parliament dominated by Conservatives remains to be seen. 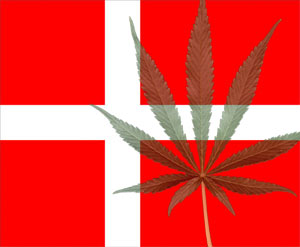 The proposal was presented to the council by the Socialists. It won on a vote of 41-12. For decades, pot (or, more likely, hash) smokers in Copenhagen were able to buy their supplies openly in the city's "hippie enclave" of Christiania. But crackdowns by conservative administrations have brought an end to the halcyon days of Pusher Street, and black market cannabis sales and attendant gang problems have now spread in the city.

"It is a huge majority in Copenhagen who votes for this. We feel that the marijuana policy we have had in place for 30 to 40 years is not working," Socialist council member Lars Rasmussen Aslan told the Danish web site Politiken. "We have to accept that the present strategy is not working," said Copenhagen Mayor Frank Jensen in remarks reported by the Copenhagen Post. "It's time to think about alternative models. And when the goal is to decriminalize the hash market, it's worth trying our idea." Jensen, a former justice minister, said his goal was to reduce tensions between rival drug-selling gangs and reduce youth exposure to gangs.

Although such a move would not eliminate gang problems, Jensen said, it would help. "Fewer young people would come in contact with the gang environment, and maybe it would keep people from moving over into harder drugs." But one Conservative politician said the council's actions would lead to nothing. "The whole thing's a waste of time, because a city council doesn't have any influence on drug laws in Denmark," said Rasmus Jarlov, a Conservative member of both the city council and the national parliament. "This issue will be decided in parliament, where there's a broad majority against it. So I don't think we ought to be using our time on issues where we have no say," he said. The proposal now goes to Justice Minister Brian Mikkelson. No word yet on when any action on it might occur.

Gov. Jon Corzine tonight signed a measure making New Jersey the 14th state to legalize marijuana for medicinal purposes, part of a flurry of bills the Democrat penned in his last full day on the job.

The marijuana bill (S119) is expected to take effect in six months. Only patients with specific illnesses would be permitted to get..

It's like a beer competition for marijuana. A cannabis festival in Aspen this spring will be the first in the state for approved growers to put their strains in a contest. The Western Slope Cannabis Crown will have about 50 medical marijuana growers enter their strains of weed.

The marijuana strains will be diagnostically tested for their THC levels. Growers will also be able to sell to medical marijuana patients. The customers would vote on a "people's choice" strain. The Cannabis Crown organizer, Bobby Scurlock, says about 1,500 tickets have been sold for the two-day event.

Seattle's new city attorney has better things to do than prosecute pot smokers, he said January 14. City Attorney Pete Holmes announced he was dismissing all marijuana possession cases, starting with those filed by his predecessor, Tom Carr, whom Holmes defeated in November. He said he dismissed two cases his first day on the job, and several others are about to be dismissed.

"We're not going to prosecute marijuana possession cases anymore," said Holmes. "I meant it when I said it" during the campaign. Holmes' criminal division chief, Craig Sims, added that he is reviewing an additional 50 cases. Barring "out of the ordinary" circumstances, Sims said, the prosecutor's office does not intend to file charges for marijuana possession.

Although voters in pot-friendly Seattle approved a 2003 initiative making marijuana the lowest law enforcement priority, former City Attorney Carr was still prosecuting pot busts. In the last half of 2008, his office handled 81 marijuana-related cases, with Carr dismissing 21 and filing charges in 60 others, including 20 where pot possession was the only charge. In the first half of 2009, Carr declined only eight of 62 marijuana-related cases, including 21 where possession was the only charge.

A pair of marijuana reform bills before the Washington state legislature were voted down by a House committee Wednesday. HB 2401 would have legalized marijuana possession for people 21 or older, and HB 1177 would have decriminalized the possession of up to 40 grams. Both bills got a public hearing before the Assembly Public Safety and Emergency Preparedness Committee last week.

But despite impressive testimony, a public opinion poll showing majority support for legalization, and the announcement by reform activists that they would put a legalization initiative on the ballot this fall, the same committee voted 6-2 against legalization and 5-3 against decriminalization. The legalization bill would have seen marijuana sold through state liquor stores and taxed at 15%, with most revenues going for drug prevention and treatment. Those programs are facing potential cuts as the state grapples with a $2.6 billion budget shortfall.

If activists have their way, by next year it will be too late. Five well-known reform activists, including Hempfest head Vivian McPeak, announced last week they had filed a ballot initiative to remove all penalties for adults who grow, possess, and sale any quantity of marijuana. They need to get 240,000 valid signatures by July 2 to qualify for the November ballot.