Denmark. Cannabis supporters take to the streets for 420 celebration 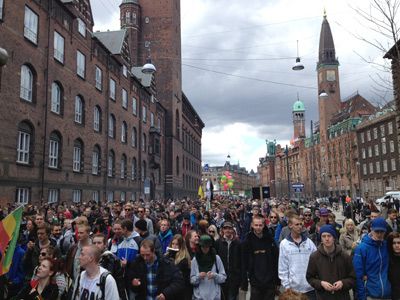 The Copenhagen Post reports a huge public march took place on 420 day (april 20th) to support the countries plans to legalise the ownership, sale and use of cannabis.  Political leaders in Denmark are coming to terms with a need to change the countries drug laws, and the 420 march was a subtle reminder of just how much public support there is for the end of cannabis prohibition.

The full report is here, http://cphpost.dk/local/cannabis-supporters-take-streets , and is well worth a read.  Many of the activists that took part in the march did their best to explain the medical uses of cannabis to bystanders.

Best wishes go to the Danish activists who are showing the rest of Scandinavia the futility and moral hypocrisy of maintaining the illegality of cannabis.