Europe: Czech Marijuana Users to Get Lesser Penalties. Czech deputies responsible for writing an amendment to the penal code are proposing much lesser sentences for pot smokers, mushroom eaters, and possibly, marijuana growers, the Czech daily Pravo reported. There is a possibility the amendment will include no penalty for growing small amounts of marijuana for personal use, the paper said. Current Czech drug laws make no distinction between marijuana and so-called hard drugs. Under that law, anyone producing illicit drugs is subject to five years in prison. But while the law makes no distinction, judicial practice does. In most cases, the possession of "quantities lesser than great" (in the case of marijuana, up to 20 cigarettes) is handled as an administrative offense, not a criminal one. The proposed amendment would completely remove the possibility of a five-year sentence for simple marijuana possession, making the maximum sentence one year. The maximum sentence for small-time growing would most probably be six months. 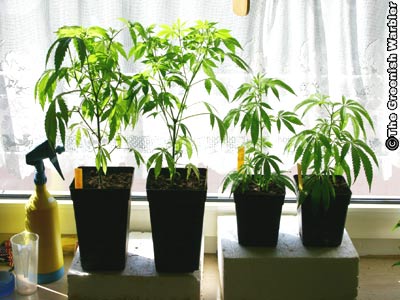 Czech republic: No penalty for growing small amounts of marijuana for personal use?

Canada: Again pot raids on the Island. The aerial search for marijuana plantations has ended for the year, but that doesn't mean pot growers can rest easy, say police. RCMP Corporal Greg Cox said Vancouver Island police officers wrapped up their nine-day air and land operation on Wednesday and reported a mind-alteringly large bumper crop was seized. Most of the 19,000 pot plants, he said, were found in the northern part of Vancouver Island. "In the local area, Lasqueti was visited, but most of the concentrations were north of Campbell River and Sayward area," Cox said.  "There were little pockets across Vancouver Island, but most of it was in the northern area.  I would be guessing, but I would say that's because it's less populated and more secluded." Police, using helicopters from the Department of National Defence, hit approximately 350 sites, pulling in an average of 2,000 plants per day. "Some sites consisted of only a few hundred plants and some were a few thousand.  This is quite a sizable quantity of plants and we believe these were destined for the streets of our community.  I think we made a sizeable impact." Cox said there was only one arrest, despite the haul. "There was one incident in the Campbell River area, where two people were tending to their crop," he said.  "There are charges in that incident."

USA: Senator Durbin supports medical marijuana. Dick Durbin (Democrats) said Thursday federal law should change to allow for the use of medical marijuana when prescribed by a physician. The Illinois Democrat spoke at a constituent breakfast in response to a question from a Pinckneyville woman who suffers from multiple sclerosis. Durbin said people with "pain issues" look for relief in every direction, including different chemicals, drugs and prescriptions. "Why would we exclude the chemical in marijuana simply because some people abuse it for recreational purposes, or whatever?" he asked.  "That makes no sense at all." Durbin, who is the Senate's second-highest ranking Democrat, said in an interview with The Associated Press afterward that he has no plans to offer legislation to change federal law. "I've got an interest in it, but I haven't been really focused on it," he said. "I just can't turn my back on it and say, 'Well, because it says marijuana on the label, we shouldn't use it,"' he said.  "If the doctor believes it's right for a person, then I think it should be prescribed -- legally."

USA: Bust puts focus on indoor pot growth. The indictments of three people accused of running a large marijuana production business in several Long Island warehouses highlight what officials call a national trend toward indoor-grown marijuana that is more potent, more profitable and more harmful. According to the U.S.  Department of Justice, the number of indoor marijuana rooms discovered nationwide increased 38 percent from 2001 to 2006.  The average number of plants found at such operations increased more than 70 percent during the same period. The men indicted, who face the most serious money-laundering and conspiracy charges and have criminal records, face life in prison if convicted.  They pleaded not guilty and were held without bail.