A British judge has refused to impose an antisocial behaviour order on a man cultivating cannabis because it is "no worse than having tomato plants". Twelve cannabis plants, worth 3,400 ₤, were discovered growing underspecial hydroponic lights at the accused Phillip Pledge's council flat. The council sought a possession order for the National Blood Servicedriver's home and an ASBO banning him from the housing estate for two years. But judge Charles Harris, QC, refused both applications, saying that smoking cannabis did not constitute a nuisance. The judge said: "Smoking or possession of a quantity of cannabis, though a criminal offence, does not constitute a nuisance. Mr. Pledge, a business partner in Oxford Hydroponics, represented himself in court. He said that the drugs were for personal use, and added: "I've not dealt drugs and it's never been proven that I dealt drugs. I am a partner in a hydroponics shop, which carries a certain stigma with it. I've been trying to get a move away for two years and been trying to wean myself off cannabis." Judge Harris said: "If you are Sherlock Holmes and you go back to Baker Street and inject yourself with cocaine, as he did, you cannot be called a nuisance. So quietly smoking cannabis at home, not that it is to be encouraged, I'm not sure at all it constitutes a nuisance. If you are simply growing it, it's no more offensive to neighbours than tomato plants." 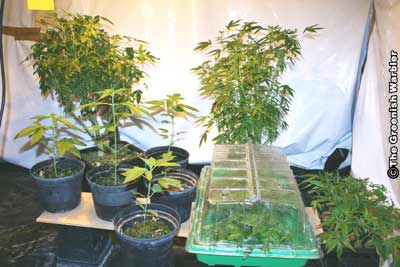 However, in the British media and public there presently are also a lot of worries about cannabis again: According to a new drug report by the government,
cannabis use has increased significantly since the law on the drug has been relaxed (downgrading of cannabis from Class B to C in January 2004).
In the past, ministers had insisted that the relaxation would not increase its use. But the confidential report now says: “Recent changes to the law have increased the number of people taking cannabis. The amount of hard drug abuse has also
increased. It appears the two rises are connected.” The document says
business is booming for drug dealers, who use cannabis to increase their “client
base”, then try to turn customers to hard drugs.

Canada resists US drug war madness: A Quebec judge has shut the door on a U.S. request to extradite 11 residents of the Bedford area of the Eastern Townships to face charges after a massive marijuana bust there last year. "We're evaluating the decision, still, and are going to explore our options once we fully do that," Tristram Coffin, assistant U.S. attorney for the district of Vermont, said yesterday from his Burlington office. "I can't comment beyond that." The U.S. Department of Justice wants the group - which includes Werner Kyling, alleged to be a kingpin of a pot ring that racked up gross annual profits of $30 million - to stand trial in Vermont. Each of the 11 would face U.S. federal charges of conspiracy to traffic and import
marijuana between 1991 and 2005.

Almost one in five Australian workers are using illegal drugs, with more than 250,000 people engaging in substance abuse at their place of employment, research shows. A study of 30,000 Australians has found that 17 per cent use illegal substances, mainly cannabis, followed by amphetamines, ecstasy, pain killers and cocaine.

10,000 hemp plants recently had to die in Berlin on occasion of the annual “Hanfparade” (hemp parade). With these plants, the organisers had created a field of hemp right in front of the Brandenburger Tor. But barely an hour after the plants had been placed there, policemen cut all stems after the organisers had refused to do it themselves. The state attorney suspected the plants to be drug hemp. Now the THC content of the plants will be examined in a laboratory.