City of Zurich: Free anonymous cannabis tests due to poisoned weed in Germany

Switzerland  -   The city of Zurich offers cannabis users to anonymously test their weed at no charge in the framework of a one month pilot project.

For that purpose, smokers can drop a small sample at the drug information centre DIZ. A speaker said that this service is offered due to cases of lead poisoned weed that have occured in Germany this year. 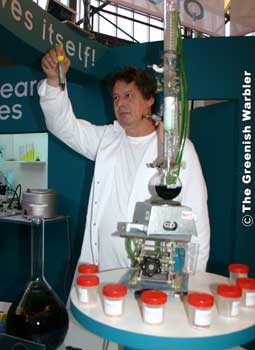 UK  -  The potency of cannabis gathered in police seizures has dropped, new official data reveals, casting doubt on one of the government's key arguments for reclassifying the drug from class C to class B. Figures collected by the Forensic Science Service and seen by guardian.co.uk show that the potency of herbal cannabis, which includes the strong "skunk" strain, has dropped from 12.7% to 9.5% since 2004, when it was first moved from class B to the less serious class C.

The FSS said the figures were not representative and were from too small a sample. But David Porteous, a criminology lecturer from Middlesex University, said: "This information suggests that, in the time that it has been a class C drug, usage levels of cannabis have fallen and so has its strength. These findings make a mockery of the decision to re-reclassify cannabis and of the government's wider claim to base policy-making decisions on scientific research. When cannabis was downgraded, the proportion of young people using it fell from 25.3% in 2003-04 to 20.9% now. Among those aged 16 to 59, the proportion over the same period fell from 10.8% to 8.2%, according to the British Crime Survey.

The board took the step "at the urging of the Sheriff in his capacity as the county's chief law enforcement and public safety official," according to county spokesman David Wert. The counties have argued that the medical marijuana program violates federal law and the state constitution. Federal law lists marijuana as a dangerous narcotic with no medical use. San Bernardino County Sheriff Gary Penrod has said the medical marijuana program act creates ethical conflicts for his officers, who must also uphold federal law.

USA: A year-old moratorium on the opening of new medical marijuana dispensaries within the Los Angeles city limits will be extended for at least another six months. The Los Angeles City Council voted Tuesday to extend the moratorium for that period as it wrestles with new draft regulations covering the dispensaries.

Los Angeles is home to hundreds of dispensaries and had seen a dispensary boom prior to the moratorium that was first enacted in August 2007. Under guidelines published last week by Attorney General Jerry Brown, dispensaries are legal, but only if they are established as co-ops or collectives and are nonprofits -- a restriction that is certain to meet with legal challenges.

It is unclear how many LA dispensaries meet those criteria. The council voted to extend the moratorium on a 14-0 vote. Prior to voting, Councilman Dennis Zine said the continued moratorium would give the city attorney's office time to craft a dispensary policy that would ensure marijuana is made available to legitimate medical patients while preventing "abuses."

Under California's medical marijuana law, a legitimate patient is anyone who has received a doctor's recommendation to use marijuana. The broadly written state law does not limit such recommendations to a defined set of diseases or symptoms. Instead it lists a number of diseases, such as cancer, AIDS, and glaucoma, then adds the words "or any other illness for which marijuana provides relief."

Petitioners turned in more than 5,000 signatures on August 20, but after they were examined by city officials, only 3,385 signatures were found to be valid. It takes 3,686 signatures to put the initiative on the ballot. The Fayetteville City Clerk was examining the signatures this week. Even if only 300 of them turn out to be valid, the measure will be on the November ballot.

Sponsored by an umbrella group known as Sensible Fayetteville, the measure would not only direct Fayetteville police and prosecutors to make such offenses their lowest priority, it would also order the city clerk to send an annual letter to state and federal officials. That letter would say: "The citizens of Fayetteville have passed an initiative to deprioritize adult marijuana offenses where the marijuana is intended for personal use and request that the federal and Arkansas state governments take immediate steps to enact similar laws." The letter would be sent each year until state and federal laws change.

"We needed about 300 additional signatures, and so far, we've collected upwards of 900," Ryan Denham, campaign director told the Northwest Arkansas Morning News last Friday. "We've almost tripled what we needed, and we're still going. We'll turn them in at the end of the day." Similar laws have been passed by communities in Missouri, Montana, Washington, California and Colorado, as well as nearby Eureka Springs, Arkansas.

USA  -  New England Patriots running back Kevin Faulk was suspended for one week and fined two weekly paychecks, or about $300,000, by NFL Commissioner Roger Goodell this week after pleading guilty in July to misdemeanor marijuana possession charges. That has the marijuana reform group SAFER (Safer Alternatives for Enjoyable Recreation) crying foul.

SAFER, whose primary argument is that marijuana is safer than alcohol and should not be treated more harshly, announced Thursday that it would deliver an online petition and letter calling for changes to the NFL's marijuana policy to Goodell today in New York City. For SAFER, the huge fine assessed against Faulk is rank hypocrisy from a sporting organization that accepts hundreds of millions of dollars in alcohol advertising.
The petition reads as follows: "Players with the National Football League who use marijuana instead of alcohol to relax and recreate are making a rational choice to use a less harmful substance. Suspending these players and taking away hundreds of thousands (or sometimes millions) of dollars for using marijuana is driving them to use alcohol, a drug that -- unlike marijuana -- contributes to violent and aggressive behavior. Unless the NFL plans to suspend every player who receives a speeding ticket -- which is considered an offense on par with marijuana possession in some states -- it has absolutely no reason to suspend players for the simple use and possession of marijuana. Doing so is not only irrational, but given the NFL's acceptance and blatant promotion of alcohol, it is exceptionally hypocritical. Marijuana is safer than alcohol and the National Football League's substance abuse policy should be changed immediately to reflect that fact."

SAFER executive director Mason Tvert said "The NFL has no problem with players using alcohol and it accepts hundreds of millions of dollars to promote booze to football fans of all ages." Yet the league punishes those players who make the safer choice to use marijuana instead of alcohol to relax and recreate. The NFL is driving its players to drink. Every objective study on marijuana has concluded that it is far less harmful than alcohol both to those who use it and to others around them," Tvert said. "It is a mystery why Commissioner Goodell and the NFL would want to steer the biggest, toughest guys in the country away from using marijuana and toward using alcohol, which contributes to aggressive behavior and countless violent crimes."