Another breakthrough has been achieved in acceptibility of medical cannabis: Recently several charitable cannabis clubs were founded in Spain, whose lawfulness was now confirmed by courts in Catalonia and the Basque region. People join to grow cannabis together and distribute it to members of the club at cost price. Only members have access to the growing rooms and the cannabis. In Spain trade with cannabis is prohibited, but possession for personal use is legal. A court in Bilbao, the biggest city of the Basque region, cleared four defendants of a cannabis club with 66 members from the prosecution of illegal cultivation of 150 kg of cannabis (fresh whole plants that resulted in 17.4 kg dried cannabis). 39 members use cannabis for medical purposes. ENCOD (European Coalition for Just and Effective Drug Policies), a European organisation for the change of the drug laws regards the Spanish cannabis clubs as a model for other countries. Recently the first association of cannabis growers was created in Belgium. As in Spain the possession of cannabis for personal use is legal.

Interesting findings once again were made in the field of science: Cannabis use is not associated with risk factors for diseases of heart and circulation. According to research published in the American Journal of Cardiology the use of cannabis is not associated with development of risk factors for cardiovascular diseases such as
heart attack and stroke. While acute cannabis use is associated with increased appetite and changes in blood pressure, a long-term study (the CARDIA study) with 3,617 participants from the United States found no effect of regular cannabis use on blood pressure and blood lipids. And against many prejudices, cannabis can prevent you from getting stupid: Scientists at The Scripps Research Institute in La Jolla found out that THC inhibits primary marker of Alzheimer's disease, i.e. the formation of amyloid plaque, the primary pathological marker for Alzheimer's disease. The study to be published in Molecular Pharmaceutics says, THC is "a considerably superior inhibitor of [amyloid plaque] aggregation" to several currently approved drugs for treating the disease. Attention: There`s a new specialised online medium on the topic of medical cannabis: Under the title “CANNABINOIDS” the IACM publishes a new journal in several languages on its website. The first article entitled "An evaluation of the quality of medicinal grade cannabis in the Netherlands" by Dr. Arno Hazekamp of the University of Leiden, The Netherlands, is now online in six languages and can be downloaded. 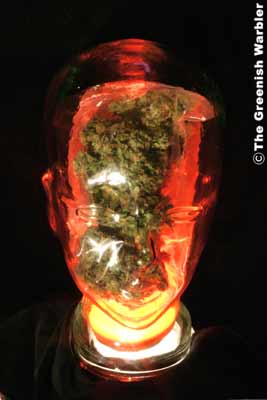 Cannabis in the brain may prevent you from getting Alzheimer`s disease.

In the UK, despite recent negative headlines, the public is still relaxed on the use of cannabis. Most people would be happy to see the personal use of cannabis
decriminalised or penalties for possession lowered to the status of a parking fine, says one of the largest opinion surveys conducted on the issue. However, the majority of the public is adamantly against any lessening of the restrictions on heroin or crack cocaine, drawing a clear distinction between so-called hard and soft drugs. Three quarters of people think that the sale and possession of hard drugs should remain a serious criminal offence but only a third think the same of soft drugs.

Dialing for dope: In Canada, dealers find fail-safe methods to deliver drugs
The make up of dial-a-dope operations is actually quite simple, but it's ruthlessly efficient. "It's just what it sounds like," said Vancouver police drug squad Det.
Jim Fisher, "A telephone-marketing system that allows users to get drugs without going to the store." A former dial-a-doper using the alias Malachi walked 24 hours through a typical operation. "It all starts with the cellphone," he said. "As long as you have a pay-as-you go phone, something that you can't trace, and a connection to a distributor you're good to go." Equipped with the SIM cards in cellphones, dealers can easily switch their contact lists from phone-to-phone and hide their call history so no one knows what the phone is being used for. "Pay as you go phones have been very problematic since they came onthe scene," admitted Fisher. "You can't really tell who is running the operations because you can't see or trace them." All dial-a-dope operations start with the distributor, or boss, who has access to the flow of drugs, mostly cocaine.In order for him to stay safe, he works solely out of a safe house, leaving cell-phone-armed drivers to make deliveries and find clients. "The distributor will be in constant touch with guys on the street making sure everything is going well, but he never puts himself out there," explained Malachi. A central distribution centre also helps protect the sellers on the street, who carry minimal amounts of drugs at any given time and can continually restock throughout the night, which results in minor possession charges should they get busted. Operations also constantly change their street vehicles to avoid detection, mainly by using rental cars. "No one uses stolen vehicles; it just draws attention to you," said Malachi. "The rentals are good because you can take one for a couple of days, run it into the ground and switch." Fisher said another popular choice is for drug dealers to constantly buy cheap $500 junkers. The fluid nature of dial-a-dopes makes for frustrating work for police. "If we do catch on to a group running a dial-a-dope, they change their numbers and switch up their entire operation overnight," said Fisher. It's that ability to operate secretly and adapt quickly that has allowed dial-a-dope operations to become a thriving, multi-million dollar enterprise in every Lower Mainland community.

Also interested in the opening of a club inland and also would like defined info,,,,if any body has the time. Thanks in advance. -:)

Can anyone tell me if there are social clubs in mallorca? Have been googling it but cant fibd a definite answer. Am going there soon and trying to get meds arranged in place fof when I am there. Thanks :)

hey guys, if you are interested in the best coffee shops in Barcleona you can check my website www.weedinbarcelona.com for more info on the legal way to consume in Barcelona :)

I, too, live in Spain (north of Málaga) and am interested in starting cannabis club. Any ideas?

I am a resident in spain and interested in starting a cannabis club for recreational and medicinal purposes. Can anybody tell me the correct procedure to setting this up?

Wrong Herbert, marihuana is illegal in the netherlands, it is just tolerated....the only country in europe that has actual law to allow it, is Belgium.

The Netherlands are the only democracy.You smoke what You want to smoke. Since the end of communism MI5 spy on UK residents, what they smoke. Your lungs, Your Health Your Life.