Canada - The federal government charges patients 15 times more for certified medical marijuana than it pays to buy the weed in bulk from its official supplier, newly released documents show. Critics say it's unconscionable to charge that high a markup to some of the country's sickest citizens, who have little income and are
often cut off from their medical marijuana supply when they can't pay their government dope bills. Records obtained under the Access to Information Act show that Health Canada pays $328.75 for each kilogram of bulk medical marijuana
produced by Prairie Plant Systems Inc. The company currently has a $10.3-million contract with Health Canada, which expires at the end of September, to grow standardized medical marijuana in an abandoned mine shaft in Flin Flon, Man. Health Canada, in turn, sells the marijuana to a small group of authorized users for
$150 - plus GST - for each 30-gram bag of ground-up flowering tops, with a strength of up to 14 per cent THC, the main active ingredient. That works out to $5,000 for each kilogram, or a markup of more than 1,500 per cent. "It's impossible for a person on disability," said Ron Lawrence, 38, a burn victim in Windsor, Ont., who needs medical marijuana to control severe pain. "The sickest people are the ones that need it the most, and they're the ones who don't work." Adds Scott McCluskey, 48, in Westbank, B.C., who suffers spinal-cord pain that is eased by marijuana: "They're selling it for criminal street prices… I don't think anybody, especially seriously ill people should have to pay this type of money for medicine." Health Canada has become a reluctant marijuana supplier, forced into the role by a series of court decisions that have accepted scientific research indicating cannabis can relieve pain when other medications fail. The courts have also said patients should not be forced into the black market to purchase their medicine. 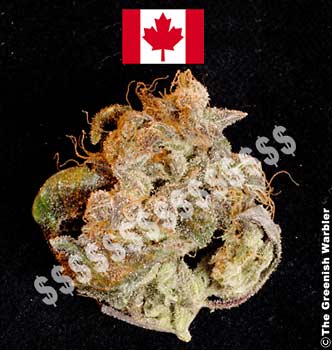 The Canadian government charges patients 15 times more for certified medical marijuana than it pays to buy the weed in bulk.

UK: A decade of Labour's war on drugs has done nothing to curb the misery and crime caused by abuse, a research group has declared. Propaganda campaigns, law enforcement and imprisonment for drug dealers have had no effect on levels of drug use, it said. Police activity against drug markets and seizures of smuggled drugs
have resulted only in lower street prices. The scathing criticism came in a report by the UK Drug Policy Commission, an independently funded group which intends to press the Government to try harder to tackle huge levels of damage caused by
drug users. It said that one in four people in their late 20s have tried a hard drug such as heroin or cocaine at least once; that nearly half of all young people have used cannabis; and that the drug addiction rate in Britain is more than twice the levels of France, Germany, Sweden or Holland. The report added that there is a drugs market worth an estimated UKP 5 billion a year, that the cost of drug-related crime is thought to be UKP 13 billion, and that one in five of all people arrested for crime are
dependent on heroin. The verdict comes at a time of growing pressure on the Government for change in the drugs laws that were last radically overhauled more than 35 years ago. Ministers are due to consider the effects of Labour's ten-year drugs programme - which began bullishly-with the 'war on drugs' in 1998 - next year.

The Netherlands: Registration of Alcohol and Drug Use for Violent Offences Cases. The Dutch police forces of Schouwen-Duiveland, Renkum-Wageningen and the Ijsselland region will register alcohol and drug use in violent offences cases. The three pilot projects will be introduced to reveal whether and how the use of alcohol and drugs influences the offender's conduct and what measures will prove appropriate. The registration comprises all forms of violence used in the public, semi-public and private domain against persons as well as property, e.g. vandalism. Given that the pilots are in anticipation of any legal requirement, the suspects will be asked to cooperate in both the alcohol and drug test on a voluntary basis. The registration of alcohol and drug use in violent offences cases is especially important for determining the proper preventive measures and imposing judicial interventions. For cases involving minors these will be criminal interventions to counteract the use of substances and for cases involving adults these will also include court-ordered special conditions in the context of a suspended sentence or a suspension of the pre-trial custody. The Ministry of Justice wants to use the findings of the pilots that will be available at the end of 2007 to improve judicial interventions aimed at substance misuse. The drug test detects the five most frequently used types of drugs: opiates, cocaine, cannabis, amphetamines and XTC. The police officers involved have been trained to carry out the drug tests and police in Schouwen-Duiveland and Renkum/Wageningen have already undertaken a trial run in this respect. Special software has been developed for the registration, which will be implemented in the business processes' system of the relevant police regions.

This is a ridiculously inaccurate article making a mockery of legitimate issues with Canada's medical marijuana program.

There is no way anybody anywhere can grow Marijuana indoors under lights which use huge amounts of electricity for .4 of a cent a gram. Please check your facts. I can believe the government screws people but I do not believe Prarie Plant Systems is the only company in the history of Canada that is not ripping the Government off. The only reason you get government contracts is because it is gravy train money.

The government can grow cannabis at a cost of less than .4 of a cent per gram. The new regulation would have sick and dieing people pay up to $10 a gram who are ALL on fixed incomes or are working part-time jobs. That is a greed factor of 2500% That is unconstituional and if they try to force that through they will be shut down with an injunction in November. WHY ARE WE PAYING FOR CANNABIS TWICE? IT IS OUR TAX MONEY GOING TO PAY FOR THE CRAPPY SHIT THEY CALL MEDICINE(have you tried it? I have and I can tell you it is crap) and the government should give it to the people who need it. It is already paid for. Why do we have to pay for it again at worst than black market dealers mark ups?