Canadian premier Gary Doer said he is not a fan of the idea of decriminalizing marijuana. A resolution up for debate at the NDP's (New Democratic Party, Doer`s party) weekend convention called for small amounts of the drug to be decriminalized. The issue is within federal jurisdiction so the resolution specifically calls for the provincial government to push for the decriminalization. The former Liberal government had begun moving in that direction but the idea was shelved when the Tories took office in January 2006. And Doer said he doesn't think it should be revisited because it would affect Canadians' ability to cross the U.S. border. "I'm not in favour of decriminalizing marijuana because I think there is a real issue of Canada-U.S. relations," said Doer. "We're trying to deal with issues of the border and issues of passports and trying to have an agreement with the United States and I don't think this helps it at this point in time." The premier said he's never tried marijuana.

New Zealand: Jail avoided for cannabis importing. A cannabis user who imported seeds over the internet was found with hydroponic equipment, cannabis plants and literature on growing fruit and vegetables. In the Christchurch District Court, Judge Robert Kerr said jail could be imposed on Alan Russell Woodfield, but he accepted Woodfield may have had the equipment for a legitimate use. Woodfield admitted charges of importing cannabis seeds and cultivating cannabis. The judge said that in March last year Customs in Auckland intercepted packages containing cannabis seeds addressed to Woodfield. A total of 30 plants, mostly immature, were found at his home, along with partially assembled hydroponic equipment, which Woodfield contended was going to be used to grow fruit and vegetables. Prosecutor Zannah Johnston said that the inference was open that it was a commercial operation, the nature of the set-up meaning a large number of plants could be grown. Lawyer Pip Hall said Woodfield's plan was to use the cannabis for his medical problems. He intended to use the equipment to grow fruit and vegetables and written material found nearby supported that. The judge said that, given Woodfield's medical problems, jail would be disproportionately severe. He was sentenced to 250 hours community work and his computer and hydroponic equipment were ordered to be destroyed.

Science: According to a meta-analysis on single cannabinoids and cannabis in neuropathic pain of MS patients cannabis-based medications are effective in treating this condition. The study included six articles and one controlled trial report, of which four examined the cannabis extract Sativex (with 196 patients), five cannabidiol (41 patients) and three THC (91 patients). 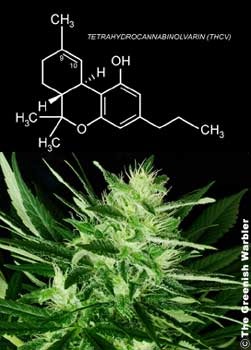 "Does THCV really antagonise the effects of THC?"

Science: WHO expert committee recommends reclassification of dronabinol. The WHO Expert Committee on Drug Dependence (ECDD) met in Geneva from 28 to 31 March 2006. I

t recommended that dronabinol (THC) should be rescheduled from Schedule II to the less restrictive Schedule III of the 1971 Convention on Psychotropic Substances of the United Nations. This recommendation will be made to the United Nations Commission on Narcotic Drugs (CND), which may accept or
reject this recommendation.Dronabinol is the international non-proprietary name (INN) for THC, a natural cannabinoid in the cannabis plant, which is mainly responsible for its psychological and most of its therapeutic effects. Dronabinol was included in Schedule I of the 1971 Convention at the time of its adoption. It was rescheduled to Schedule II by the United Nations Commission on Narcotic
Drugs in 1991.According to the ECDD the abuse of dronabinol is currently
rare and there have been very few specific reports of its occurrence. Dronabinol preparations have been used in several countries in the treatment of nausea and vomiting associated with cancer chemotherapy and in the treatment of anorexia associated with weight loss in patients with AIDS. It has also been indicated in the treatment of chronic pain and neurological disorders.