Canada: Vancouver Island police say getting high is an effective way to find pot plants. Over nine days, police on the Island found 19,000 marijuana plants by using Canadian military pilots to fly officers in to about 350 "remote and challenging locations" where pot was being grown on Crown land, said the RCMP's Vancouver Island district spokesman Cpl.  Greg Cox. The summer marijuana eradication program wrapped up this week.  It's the eighth year for the annual project. "To be the best of my knowledge, this is the largest haul," said Cox.  "I think it's a combination of things," Cox said.  "The weather was very co-operative with us this year, which made it a little bit easier for the project to be done.  Marijuana production -- and I don't mean this to be a pun -- is a growing problem." Critics call the police's summer eradication program a public relations exercise and ineffective use of taxpayer dollars. 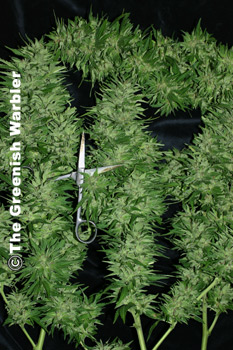 "Harvest time - A lot of plants is confiscated in these weeks unfortunately."

Canada: Total Of 1,122 plants seized by means of helicopter surveillance. Drug squad officers in an RCMP helicopter were flying over Cape Breton this week in an operation aimed at nipping marijuana grow-ops in the bud. The RCMP officers found several grow-ops where 1,122 plants were seized. Const.  Kal George said the aim of the marijuana eradication program is to get rid of the illegal drug at source before it hits the street.  There are probably many other grow-ops in the Cape Breton Regional Municipality, he said. "That's probably not even half of what is out there," he said.  "It's such a big area to cover. "There is a pretty big market for marijuana everywhere." Drug squad officers are still doing investigations of the drugs seized that may result in charges, he said. Some of the marijuana plants were found on more remote land but others were in backyards in suburban areas, he said, while refusing to identify any of the exact locations. George said the drug squad was following up intelligence and reports to Crime Stoppers as well as conducting a general surveillance of likely areas of the Cape Breton Regional Municipality. Marijuana grow operations are typically located near a water supply, he noted. "We search in those areas .  .  .  good growing areas." The average marijuana plant is probably worth about $1,000, he said.

USA/California: Three Medical Cannabis Dispensaries Shuttered in Joint Action by DEA and Local Police. San Mateo - In the largest Bay Area raid of medical marijuana
dispensaries in nearly a year, federal agents stormed three medical
cannabis outlets in downtown San Mateo on Wednesday afternoon and
shut them down. The DEA, accompanied by members of the San Mateo County Narcotics Task Force and the San Mateo Police Department, seized 50 pounds of
processed marijuana, hashish, cannabis-laced edibles and approximately $30,000 in cash, according to a statement by the U.S. Department of Justice. No arrests were reported. The raids occurred in the middle of the afternoon, and the three
dispensaries were located in busy, commercial districts of the city -- including one site in an office building in the city's commercial center on Third Avenue. "A bunch of guys with drawn guns dropped into the building and bashed the door down, shock-and-awe style," said Josh Snyder, an employee of an Internet startup in the Third Avenue office building.

USA: Fight for the acceptance of state medicinal cannabis laws by the Bush administration. While now all eight Democratic presidential candidates for the
election in 2008 have pledged to stop federal raids on medical cannabis patients in the 12 states with laws allowing the use of cannabis to treat medical conditions, raids continue in California and started in New Mexico. California was the first state to
legalize the medical use of cannabis in 1996, New Mexico was the last in 2007. In August US Senator Barack Obama became the latest Democratic presidential candidate to say that if he were elected president he would end raids from federal law
enforcement agencies. The governor of New Mexico, Bill Richardson, heavily critizised the Bush administration over the first raid in New Mexico and
the arrest of a wheelchair-bound man who was certified by the state Health Department to possess and use cannabis for medical reasons. A task force with members of the federal Drug Enforcement Agency, the FBI and state and local police
agencies raided the home of Leonard French, who is one of 38 patients so far approved to participate in the state medical cannabis program, and seized his cannabis plants. In recent months several raids of federal agents were also performed on medical cannabis distribution centres in California.

Science: Osteoporosis- In experimental studies it was shown that the CB1 receptor
regulates bone formation. Enhanced bone formation and improved fracture healing was associated with a high level of the endocannabinoid 2-arachidonoylglycerol (2-AG). This enhancement was absent in mice without CB1 receptors. This
observation can help to develop treatments for osteoporosis and disturbed fracture healing.

Science: Cognitive performance- In research at the University of California with 65 adolescent cannabis users and 34 control persons with an age of 16-18 years it was demonstrated that subtle deficits in cognitive performance remain after a month of abstinence. Adolescent cannabis users demonstrated slower psychomotor speed, and poorer complex attention, story memory, and planning ability compared with controls.