Despite the fact the Canadian government has already spent more than $5.5-million on the program, fewer than 200 Canadians are currently enrolled in the program. The Canadian AIDS Society reports only 1.7 percent of Canadian medical marijuana patients take part in the government's program, while 85 per cent of them obtain their marijuana on the black market. "The proof is in the pudding - if the product is substandard, people will get it elsewhere," says Marc Boris St-Maurice of the Montreal Compassion Centre. "When Health Canada provides a top-notch product, then you'll find more people using it. Right now there are a lot of complaints about the quality, the concentration and the state in which [the pot] is delivered. A lot of that has to do with the restrictions and guidelines set by Health Canada, so it's not all the fault of Prairie Plant Systems." St-Maurice expects the tendering process for a new medical marijuana contract will be open this September, at which point the Montreal Compassion Centre will submit a bid. "We have the knowledge and experience because we deal with patients on a daily basis. We can deliver a product for a good price and meet Heath Canada's requirements, and at the same time better educate them to improve the program. We also think they should have more than one supplier so that monopoly isn't an issue. Competition is good." If the Montreal Compassion Centre gets the contract, St-Maurice says they'll grow the medical marijuana outside Montreal. "We'll set up shop in small towns in Quebec where people need the work."

But while the Canadian state itself acts as legal marijuana seller, it relentlessly pursues those growing for the black market. A team of police officers, with assistance from the Canadian Forces, have taken flight in search of outdoor marijuana grow operations on Vancouver Island. Mounties worked alongside officers from Saanich and Victoria, with their goal during the annual project to locate and destroy marijuana grown outdoors, often on Crown land. "The location of these outdoor marijuana grow operations poses unique challenges for our officers," noted Const.  Darren Lagan from the RCMP's drug and organized crime awareness service and spokesperson for the operation. "Through our partnership with the Canadian military, we are able to utilize their expertise and equipment to gain access to these difficult locations." According to Lagan, the production of marijuana is directly tied to and funds organized crime groups through its street level sale in B.C.  communities. Outdoor marijuana production, as seen by police in the past, poses a significant environmental risk, where streams are diverted and growth-enhancing chemicals and pesticides are introduced to pristine land. Garbage is often strewn about post-production sites. "The impact this illegal activity has on our communities goes beyond its resulting supply of street level drugs to include environmental damage and destruction," said Lagan.  RCMP and Canadian Forces helicopters began their search Aug. 23 for outdoor grow operations across Vancouver Island, with flights taking off in the morning.

The mayor of the Dutch city of Maastricht, Gerd Leers, wants to move most of the city's 16 licensed cannabis cafesto the edge of town, preferably close to the border. Maastricht, a medieval town on the Meuse River in the hilly south of the Netherlands, has long cherished its rare position, with Belgium and Germany just a few miles away, giving the people a casual ease with foreign languages, food and visitors. 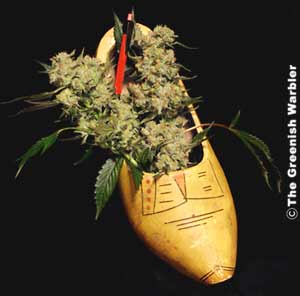 Dutch marijuana sale is more and more shifted to the borders.

The police say drug tourists, estimated at more than a million per year, come to shop from neighboring countries, some as far away as France and Switzerland. The police regularly destroy indoor nurseries, often detected because of the high electricity bills run up by the grow lights, he said. But new nurseries, hidden in attics and basements, keep springing up to feed the international clientele. Residents complain of traffic problems, petty crime, loitering and public urinating. There have been shoot-outs between Balkan gangs. Maastricht's small police forcesays it cannot cope and is already spending one-third of its time on drug-related problems. Leers, and the town council have been searching for answers. Forbidding sales to nonresidents would likely violate European antidiscrimination rules, and closing the cannabis cafes is not the solution either, he said. "The trade will just go underground because demand will not disappear." So he has drawn up a scheme to move at least half the cafes away from the charming narrow downtown streets and resettle them along the highways near the borders. He has met with mayors from a dozen nearby Belgian and German towns and villages, explaining his ideas and pleading for cross-border solidarity and greater collaboration. Some have signed a cooperation plan, but others have protested. Several other Dutch border cities intend to relocate their cannabis outlets. "We have already moved two cafes close to the frontier with Germany, where most clients come from," said Rick van Druten, a town official in Venlo.