USA  -  Eddy Lepp, a medical and religious use of marijuana advocate named High Times "2004 Freedom Fighter of the Year," faces a mandatory minimum 10-year prison sentence and up to life after a federal jury in San Francisco found him guilty of conspiracy and cultivation of marijuana with the intent to distribute. Sentencing is set for December 1. 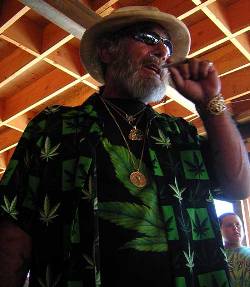 Lepp was arrested in 2004 after DEA agents said they found some 32,000 plants in gardens on his property near Upper Lake. Although US District Judge Marilyn Hall Patel ruled the seizure was based on an invalid search warrant, she allowed prosecutors to enter into evidence 24,000 plants that were growing in plain view of a state highway.

Under federal court rules, Lepp could not mount a medical marijuana defense, and Judge Patel also refused to let him mount a religious use defense. As she pondered the religious defense issue, Patel said that while it may have been possible in a personal use case, it could not apply in a case where someone was growing thousands of plants and distributing them to anonymous parishioners.

"I truly feel I was very, very railroaded by the system, and specifically by (US District) Judge Marilyn Patel," he told the Santa Rosa Press-Democrat after the verdict. Lepp said he is both a Rastafarian and a member of the Universal Life Church and that the marijuana was being grown for spiritual as well as medicinal purposes. Lepp told the court that the plants, grown at a site known as "Eddy's Medicinal Gardens," were not his, but were being grown cooperatively by members of his church, the The Multi-Denominational Ministry of Cannabis & Rastafari.

"All I did was make the land available to the ministry," he said.  His attorneys said they planned to appeal on the religious defense and possibly other grounds. If those appeals fail, Lepp will spend much - if not all - of the rest of his life in the federal gulag.

UK: Will cannabis seeds be banned?

UK  -  In a political U-turn, the Liberal Democrats not-so-liberal drugs legalisation policies on cannabis was thrown into question by Tom Brake MP, who split his party in the middle by introducing Bill 136 in July, the Prohibition of Cannabis Seeds Bill.

Ingo Wagenknecht, a spokesman for the Legalise Cannabis Alliance (UK) said: “Such a bill will not only be unenforceable, impractical and an outright waste of taxpayers money to enforce. It will diminish our agricultural choices and introduce a Government-led cartel regime as to what species can be grown. Farmers, just as with GMO’s, currently growing hemp for industrial and medicinal purposes under Government license, would have to agree not to sell or save seeds for the next year, a ludicrous suggestion that belies Lib Dem unity on their policies.”

USA  -  Fayetteville, Arkansas, will be the latest locality to vote on an initiative that would make adult marijuana possession offenses the lowest law enforcement priority. City officials certified late last week that, after a second round of signature-gathering, initiative organizers had indeed collected more than enough valid signatures to place the measure on the November 4 ballot.

Sponsored by Sensible Fayetteville, the initiative would "make investigations, citations, arrests, property seizures, and prosecutions for adult marijuana and marijuana paraphernalia offenses, where the marijuana was intended for adult personal use, the City of Fayetteville's lowest law enforcement and prosecutorial priority." It would also require city officials to write annual letters to state and federal authorities calling for the reform of marijuana laws.

According to Sensible Fayetteville, 402 people were arrested on marijuana possession charges in Fayetteville in 2005 alone, while the state of Arkansas spends $30 million a year enforcing marijuana laws. Marijuana arrests "clog the courts and jails" and policing resources "would be better-spent fighting serious and violent crimes," the group said. But it looks like Fayetteville prosecutors and police, as well as University of Arkansas police, are going to ignore the will of the voters if the measure passes.

Ireland  -   An Irish judge last Friday threw out drugged driving charges against a young driver, saying that a positive result for marijuana in his urine sample was not specific enough to allow him to conclude that the driver was indeed impaired.

Judge Kevin Kilrane of the Ballyshannon District Court in Donegal also criticized the Road Safety Medical Bureau for failing to test for the level of drug intoxication in its drug tests. Peter Gillen was pulled over shortly after 4:00am for driving erratically, and Garda Officer Sean Flynn described him as "very shocked, unsteady, and very agitated" upon being stopped.

Gillen tested negative on a breath test for alcohol, but Flynn arrested him on suspicion of drugged driving, and a urine sample Gillen provided soon after came up positive for marijuana. That wasn't enough for Judge Kilrane to find Gillen guilty of drugged driving, which carries a harsh penalty of an automatic four-year loss of one's drivers' license.

The mere presence of marijuana in Gillen's system did not show he was impaired, the judge said. "The defendant could have been stoned out of his mind or he might have had a trace element only," Kilrane said. "At best, all you have is suspicion, and suspicion is not enough." The evidence was "too thin" to convict he said, as he dismissed the charge.

UK  -  According to a press release by the British company GW Pharmaceuticals, Sativex was effective in 42 patients with multiple sclerosis and central neuropathic pain who had previously been in a phase III study and who continued to take Sativex for 12 weeks. They were then randomised to a treatment with Sativex or placebo for a further 4 weeks in a double-blinded manner.

Sativex is a cannabis extract containing equal amounts of dronabinol (THC) and cannabidiol (CBD), which is administered as a spray into the mouth. During this four-week period, patients were not permitted to adjust their dose.  In the patients who were randomised to cannabis, pain scores remained stable. In the patients randomised to placebo, pain and sleep scores deteriorated.

There was a significant difference between the pain scores in the Sativex and the placebo group, and sleep quality was also significantly better with the cannabis extract. During this four-week period, there were 2 patients with adverse events on Sativex, and 5 on placebo. One patient on placebo withdrew from the study. There was no evidence of any withdrawal syndrome.

In addition, two known substances (chrysoeriol and 6-prenylapigenin) were detected for the first time in cannabis. Some of these compounds displayed weak to strong activities against bacteria, leishmania, and pathogens causing malaria.