California  -  Gov. Arnold Schwarzenegger Wednesday vetoed a bill that would have protected medical marijuana patients from being fired from their jobs for testing positive for pot on a drug test. The bill, AB 2279, authored by marijuana-friendly Assemblyman Mark Leno (D-San Francisco), would have overturned a January California Supreme Court ruling that allowed employees to fire or otherwise punish employees who legally use medical marijuana under state law. 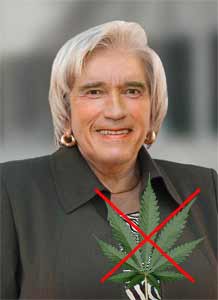 Under the Leno bill, only people in safety-related or law enforcement positions could have been fired. In that January ruling, the Supreme Court held that the state's Compassionate Use Act did exempt patients and caregivers from being prosecuted by the state, but was not intended to stop employers from firing workers for violating federal drug laws. Schwarzenegger sang from the same hymnal in his veto message. "I am concerned with interference in employment decisions as they relate to marijuana use," the governor wrote. "Employment protection was not a goal of the initiative as passed by voters in 1996."

But medical marijuana supporters who spoke to the San Francisco Chronicle after the veto announcement begged to differ. "The intent of Prop. 215 was to treat marijuana like other legal pharmaceutical drugs," said Dale Gieringer, a coauthor of the ballot measure and California coordinator of the National Organization for the Reform of Marijuana Laws.

Latin America  -  Faced with a mounting death toll in his war with powerful drug trafficking organizations, Mexico President Felipe Calderon has moved to decriminalize the possession of small amounts of drugs, according to a Reuters report Thursday afternoon. The only other source reporting the news Thursday evening was the Mexican news agency Notimex.

The measure comes as part of a public security proposal aimed at combating the traffickers with better coordination among security forces. But Calderon's moving to decriminalize drugs was a surprise move. His predecessor, Vicente Fox, sent a similar bill to congress in 2006, only to pull it in the face of pressure from the US and critics in both countries who said it would create "drug tourism." Under the proposed legislation, people carrying up to 2 grams (0.07 ounces) of marijuana or opium, half a gram of cocaine, 50 milligrams of heroin or 40 milligrams of methamphetamine would not face criminal charges -- if they voluntarily agreed to undergo medical treatment "for their pharmaco-dependency." Those amounts are considered "for immediate personal consumption." "What we are seeking is to not treat an addict as a criminal, but rather as a sick person and give them psychological and medical treatment," said Sen.

Alejandro Gonzalez, head of the Senate's justice committee. People caught possessing up to a thousand times the personal dose units (about 4 ½ pounds of pot, a bit more than a pound of cocaine, or about two ounces of heroin or speed) would face criminal charges as drug possessors by the Common Public Ministry (or local courts). People caught possessing quantities larger than that would be treated as drug traffickers and dealt with by the Federal Public Ministry (or federal courts). The idea is to free up police to go after the drug traffickers -- in other words, to intensify the deadly battle against the drug gangs. Prohibition-related violence has killed more than 3,000 people in Mexico this week, including nine persons whose executed bodies were found in Tijuana Thursday morning, making a total of 33 people killed in the last four days.

Europe  -  Smoking marijuana is less harmful than smoking cigarettes or drinking alcohol, said the British think-thank the Beckley Foundation in a report announced Thursday. (The report is not online -- it will be published by Oxford University Press -- but see the foundation's Cannabis Commission web page for its outlines.)

"Although cannabis can have a negative impact on health, including mental health, in terms of relative harms it is considerably less harmful than alcohol or tobacco," said the report. "Many of the harms associated with cannabis use are the result of prohibition itself, particularly the social harms arising from arrest and imprisonment," it said. The report comes as the British government is moving to reschedule marijuana from a Class C drug to a more heavily-punished Class B drug.

British officials have expressed great concern over the potency of marijuana, especially "skunk," which is apparently their generic name for any high-potency, home-grown weed, and its links to mental health problems in some users. Rescheduling marijuana is the wrong way to go, said the foundation. "It is only through a regulated market that we can better protect young people from the ever more potent forms of dope," it said.

USA / Medical Marijuana: Bill Coming Down the Pike in Idaho?

USA  -  Idaho is a rocked-rib Republican state, and the state's Republican Party is no friend of medical marijuana, but that isn't stopping one GOP legislator from going ahead with plans to introduce a medical marijuana bill in the next legislative session. Rep. Tom Trail (R-Moscow) told the local Fort Mill Times over the weekend that he is drafting a bill now.

Although Idaho is a conservative state, it is bordered by four medical marijuana states -- Washington, Oregon, Nevada, and Montana -- as well as less medical marijuana-friendly Utah and Wyoming. And voters in at least one Idaho town, Hailey, last year approved a municipal medical marijuana referendum. After town officials balked at enforcing them, voters passed it again in May. Rep. Trail said the bill he is drafting will be based on existing laws in Oregon and Washington.

He also said he has been in contact with some Idaho doctors who support allowing the use of medical marijuana. Still, it will be an uphill fight for the Panhandle Republican. In June, the GOP state convention committee voted 21-9 to oppose any relaxation of Idaho's marijuana laws, including medical marijuana. And there's still no medical marijuana in Hailey -- officials there filed a lawsuit after the May vote seeking guidance on how to deal with unruly voters who don't want authorities brutalizing medical marijuana users.

USA / Public Opinion  -   According to a Zogby/Inter-American Dialogue poll released Thursday, more than three-quarters of likely voters polled said America's drug war is a failure. That is a sharp contrast with current US and state drug policies. The poll also found significant differences between US policy in the hemisphere and what respondents would like to see.

On drug policy, 76% believe the US war on drugs is failing. That included the vast majority of Democrats (86%) and independents (81%) and even a majority of Republicans (61%). Among Barack Obama supporters, 89% agreed, and among John McCain supporters 61% agreed. While it is not clear that a belief that the war on drugs is failing suggests support for drug reform -- it could include those who believe it is failing because we have not tried hard enough -- it does suggest an emerging consensus that the current path is the wrong one.