In Great Britain, there is much hassle right now about “new super strength cannabis” – they refer to “Skunk”, a weed strain that growers from all over the world have been already growing for more than 20 years now. Experts warn this new strain of cannabis is so incredibly strong it can bring on the early signs of schizophrenia from a single puff. Also the big newspaper “The Independent” has recently jumped on the skunk-panic bandwagon with a brash tabloid headline: 'Cannabis - An apology', above a figure of 10,000 in big red letters - which we are informed is the number of teenagers treated for 'cannabis addiction' last year, apparently ten-fold higher than back in 1997. Inside, along with almost five pages of news coverage, there are opinion pieces by Rosie Boycott (the IOS editor who launched their cannabis legalisation campaign 10 years ago) psychiatrist Robin Murray, and a leader in which the they retract their support for Boycott's legalisation campaign - hence the front page headline. Even The United Nations has issued an unprecedented warning to Britain about the growing threat to public health from potent new forms of cannabis,
saying there is mounting evidence of "just how dangerous" the drug has become. Antonio Costa, the executive director of the UN Office on Drugs and Crime, says each country has the "drug problem it deserves", and warns that the British government must "avoid being swayed by misguided notions of tolerance". He says: "Many [people] subscribe to the vague, laissez-faire tolerance of cannabis which is
increasingly prevalent among educated people in Western countries. That consensus needs to be challenged. Evidence of the damage to mental health caused by cannabis use is mounting and cannot be ignored."

But contrary to this panicful present debate, some of Britain's leading drug experts demand today that the government's classification regime be scrapped and replaced by one that more honestly reflects the harm caused by alcohol and tobacco.
They say the current ABC system is "arbitrary" and not based on evidence. The scientists, including members of the government's top advisory committee on drug classification, have produced a rigorous assessment of the social and individual harm caused by 20 substances, and believe this should form the basis of any future ranking. By their analysis, alcohol and tobacco are rated as more dangerous
than cannabis, LSD and ecstasy. 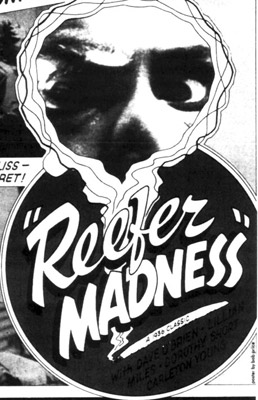 America: The U.S. Army, in a search for "non-lethal incapacitating agents," tested cannabis-based drugs on GI volunteers throughout the 1960s according to James Ketchum, MD, the psychiatrist who led the classified research program at Edgewood Arsenal in Maryland. Ketchum retired as a colonel in 1976 and now lives in Santa Rosa. He has written a memoir, "Chemical Warfare: Secrets Almost Forgotten," in
which he describes experiments conducted at Edgewood and staunchly defends the Army's ethical standards. In a talk to the Society of Cannabis Clinicians March 9 in Los Angeles, Ketchum recounted the Army's experiments with cannabinoid drugs. Ketchum was a young captain finishing a residency at Walter Reed Army Hospital when he got assigned in 1961 to be the supervising psychiatrist at Edgewood Arsenal. The new president, John F. Kennedy, was enthusiastic about funding the search for non-lethal incapacitants (first authorized by Eisenhower in 1958). Camelot's ideal weapon: one that leaves the infrastructure intact and the
population manageable. The synthetic analog of THC tested by the Army in pursuit of thisideal, EA 2233, was developed by a chemist named Harry Pars employed by the Arthur D. Little company of Cambridge, Mass. It was a mixture of eight stereoisomers of the THC molecule (different arrangements of the same atoms). EA 2233 was ingested at strengths ranging from 10 to 60 micrograms per kilogram of body weight. Although its effects lasted up to 30 hours, they were not potent enough for military
purposes. Ketchum excerpts an interview with a GI on EA 2233 in his book. The responses are pretty much what you'd expect from someone who had ingested mucho THC being questioned by an unthreatening authority figure.