At the end of March, a Brazilian appeals court in São Paulo declared that
possession of drugs for personal use is not a criminal offense. Several lower
courts had previously ruled in the same way, but the ruling from the São
Paulo Justice Court's 6th Criminal Chamber marked the first time an appeals
court there had found Brazil's drug law unconstitutional as it pertains to
simple drug possession. The ruling came in the case of Ronaldo Lopes, who was arrested with 7.7 grams of cocaine in three separate bags on the night before Carnival began in 2007. Lopes acknowledged that the drugs were his and said they were
for his personal use. Lopes was sentenced to 2 1/2 years in prison as a drug
trafficker. But the appeals court judges threw out the trafficking charge since it was based on an anonymous complaint. It then threw out the possession charge, saying it was unconstitutional. Psicotropicus banner promoting marijuana (maconha) legalization.
In his opinion in the case, Judge José Henrique Rodrigues Torres said the law criminalizing drug possession for personal use was invalid because it violated the constitutional principles of harm (there is no harm to third parties), privacy (it is a personal choice), and equality (possessing alcohol is not a crime). "One cannot admit any state intervention, mainly repressive and of penal character, in the realm of personal choice, especially when it comes to legislating morality," he said. The ruling applies only to Lopes, but can be used as a precedent in other court proceedings. There is no word yet on whether the Brazilian government will appeal. The ruling comes nearly two years after Brazil changed its drug laws to depenalize - but not decriminalize - drug possession for personal use. Under that law, drug possession is still a criminal offense, but penalties are limited to fines, fees, education, and community service. 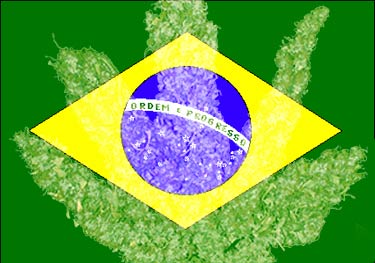 The Netherlands: Lawyer claims Ireland is in breach of the Schengen  Agreement over cannabis use by MS patient A Dutch lawyer has claimed the Irish Government is in breach of its commitments to the Schengen Agreement by not allowing a multiple sclerosis patient into the country in possession of cannabis he requires for medicinal purposes. Noel McCullagh is involved in a legal battle to allow him to return to Ireland from the Netherlands in possession of his prescribed cannabis. Mr McCullagh said he has been unable to see his parents for two years because he would be arrested if found in possession of the drug by Irish officials. His lawyer, Jasper Pauw, said that under Schengen, an agreement designed to abolish physical borders between
European countries, Mr McCullagh should be allowed to bring the cannabis into Ireland. He said that Ireland signed Article 75 of the Schengen Agreement. "This says when people use a medicine in a certain Schengen country and the medicine is legal in that country, people can travel freely inside the Schengen zone and bring that medicine as long as they have a certificate," he said. A spokeswoman of the Irish Department of Health said,  "Any person entering the country with medicinal cannabis could be charged under the Misuse of Drugs Act with unauthorised possession." The case is currently undergoing an evaluation by the Department of Justice.

Science: Long-term heavy use of cannabis may cause two important brain regions to shrink. According to research by an Australian group heavy long-term
cannabis use may cause two brain regions (hippocampus and amygdala), which are rich in cannabinoid receptors to shrink. The scientists compared brain scans of 15 cannabis users (mean age: 39.8 years), who had used at least 5 cannabis cigarettes
daily for at least 10 years (average: 19.7 years) with 16 non-users (mean age: 36.4 years). In the cannabis group the volume of the hippocampus was on average 12 per cent and the volume of the amygdala on average 7 per cent smaller. The hippocampus plays an important role in memory and emotion, while the amygdala plays a critical role in fear and aggression. The cannabis users were also more likely to exhibit mild signs of
psychotic disorders. The article received much media coverage. Critics pointed out
that this research was conducted with only a few participants, and that the vast majority of cannabis users do not have such heavy consumption rates. Earlier research by scientists of Havard University in Boston, USA, published in 2005, did not find any differences in the average volume of the hippocampus in 22 long-term heavy cannabis users compared to 26 non-users. The researchers of the new study acknowledged that their investigation did not prove it was the cannabis and not some other factor that caused the brain differences. But lead researcher Dr. Murat Yucel said the findings certainly suggested cannabis was the cause.

USA: California - According to an article of the New York Times the state of
California earns about 100 million US Dollars (about 64 million Euros) in state sale taxes from the 2 billion US Dollars (about 1.3 billion Euros) revenues by the estimated 500 medical cannabis dispensaries. More at:
http://www.nytimes.com/2008/05/31/technology/31online.html

Science: Potency of cannabis. Researchers of the Australian National Drug and Alcohol
Research Centre reviewed the available international literature of patterns of THC content in cannabis. They note that "cannabis samples tested in the United States, the Netherlands, United Kingdom and Italy have shown increases in  potency over the last 10 years. Some countries have not shown significant increases in potency, while other countries have not monitored potency over time." They concluded that "claims made in the public domain about a  20- or 30-fold increase in cannabis potency (...) are not supported currently by the evidence."

Science: Later development - According to a longitudinal study conducted in New Zealand cannabis use at ages 14-21 was associated with a lower educatinal level and lower income by age 25, higher unemployment and lower levels of life satisfaction. Researchers concluded that "the results of the present study suggest that increasing cannabis use in late adolescence and early adulthood is associated with a range of adverse outcomes in later life."