Belgium: The Court of Appeal in Antwerpen (Chamber 13) has acquitted the board members of the Belgian Cannabis Social Club Trekt Uw Plant of the accusation "incitement to drug use", for which they had been convicted in February 2009 by the Correctional Court. The courtcase came about after the events of 3 and 5 May 2008. During those events the Board Members of Trekt Uw Plant put each a cannabis seed for their personal plant in a pot. 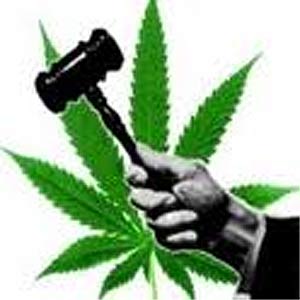 In this way, they established a collective cannabis plantation, based on a ministerial guideline dating from January 2005 which establishes that the possession of max. 3 grammes or 1 cannabisplant is no longer persecuted. However, the Antwerp prosecutor decided to persecute the board members on the accusation of "incitement to drug use". The Court of Appeal has judged that the actions of Trekt Uw Plant were not meant to incite others to use.

The Court accepted the arguments of the defense that these actions are meant to create legal security for the cultivation of cannabis for personal use, in which the promotion of public health and the prevention of public nuisance and criminality are crucial factors. With this verdict, the Court of Appeal confirms that the goals of Trekt Uw Plant are legitimate. Trekt Uw Plant wants to be a legal alternative for the illegal market. If Belgian cannabis users may grow their cannabis by themselves or in group, they do not need to come in contact with this illegal market and the number of Belgian tourists to coffeeshops atin the Dutch border cities will fall significantly.

Marijuana cultivation in Mexico increased 35 percent in 2008 and continues to grow, even as authorities there push forward with a large offensive against drug cartels that smuggle the product into the United States, according to a State Department report released this week. The 2010 International Narcotics Control Strategy Report (INCSR), is a yearly report that assess anti-drug efforts around the world.

The part of the report dealing with Mexico is illuminating because most of the illegal drugs in the United States are transported and smuggled through there. "There's a broad impact in the United States of cartel operations that are based or emanating from Mexico," Assistant Secretary of State David T. Johnson said at the news conference where the report was released.

The report could be additional fuel for critics who say that Mexican President Felipe Calderon's war against the drug cartels has been ineffective at stopping the drug violence or the flow of illegal drugs. "Despite the efforts of the (Mexican government), drug cultivation rose significantly in 2009 according to U.S. government agencies' estimates," the report stated. In 2008, 12,000 hectacres were used for marijuana cultivation, up from 8,900 in 2007. The 35 percent increase is the most recent statistic available, and marks a 16-year high. Mexico also eradicated fewer marijuana plants than in previous years, the study said.

The active ingredient in marijuana cuts tumor growth in common lung cancer in half and significantly reduces the ability of the cancer to spread, say researchers at Harvard University who tested the chemical in both lab and mouse studies. They say this is the first set of experiments to show that the compound, Delta-tetrahydrocannabinol (THC), inhibits EGF-induced growth and migration in epidermal growth factor receptor (EGFR) expressing non-small cell lung cancer cell lines.

Lung cancers that over-express EGFR are usually highly aggressive and resistant to chemotherapy. THC that targets cannabinoid receptors CB1 and CB2 is similar in function to endocannabinoids, which are cannabinoids that are naturally produced in the body and activate these receptors. The researchers suggest that THC or other designer agents that activate these receptors might be used in a targeted fashion to treat lung cancer. "The beauty of this study is that we are showing that a substance of abuse, if used prudently, may offer a new road to therapy against lung cancer," said Anju Preet, Ph.D., a researcher in the Division of Experimental Medicine.


Legalization debate: So Say They Now

US and Mexican Officials Say No to Debating. Representatives of the US and Mexican governments meeting at the US-Mexico Bi-national Drug Demand Reduction Policy Meeting in Washington, DC, this week took pains to make clear that neither government is prepared to consider drug legalization.

Although legalization wasn't on the meeting's agenda, both Gil Kerlikowske, head of the Office of National Drug Control Policy (ONDCP -- the drug czar's office), and Mexican Health Secretary Jose Angel Cordova Villalobos felt impelled to denounce it. "Legalization isn't a subject under discussion under the Obama administration under any circumstances," said Kerlikowske. Such proposals do not hold up "under the thinnest veil of scrutiny," he said. "The reasons for this are multiple: There is no evidence that legalization would reduce the violence or benefit the economy."

In Detroit, a cannabis college was recently opened with courses on how to grow marijuana - and harvest, cook and sell it too - after Michigan legalised the drug as a medicine. Students get instruction from horticulturalists, doctors and lawyers as well as hands-on experience cultivating plants and guidance on how to protect their stash from the criminal element.

With more than 1,000 medical marijuana certificates issued each month in Michigan for users and growers to sell to them, there is demand for places at MedGrow Cannabis College, located in a small office block. Among the first students paying $475 (£285) for six evening classes are people reliant on marijuana for pain relief and those who help them, including a clergyman who runs an Aids clinic.