Belgium: Trekt Uw Plant brought in its first harvest of 2011

Belgium: At the beginning of April, the First Cannabis Social Club of Belgium, Trekt Uw Plant in Antwerp, brought in its first harvest of 2011. 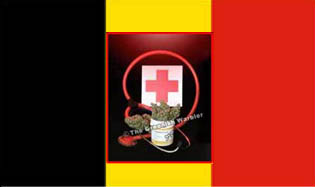 Belgium: Trekt Uw Plant brought in its first harvest of 2011

In a meeting in Antwerp 30 members received their first plant of the year containing each 25 grammes of cannabis.

Since February 2010 the association grows cannabis for the personal use of its members, on the basis of the principle 1 plant per member. We base ourselves on a ministerial guideline  that was signed in January 2005 by the Minister of Justice and all 5 Chief Prosecutors of Belgium. According to this guideline, the possession of max. 3 grammes of cannabis and 1 cannabis plant by adults will no longer be prosecuted. Growing cannabis for personal use is a sensible and healthy alterntive to the illegal market and the tourism from Belgians to Dutch coffeeshops.

Trekt Uw Plant uses only ecological cultivation methods, without any risk of contamination or adulteration of the product, like it can be the case on the black market. Contrary to the illegal market, a Cannabis Social Club is not accessible to minors. And because members of Trekt Uw Plant do not need to drive to the Netherlands anymore, to buy cannabis in coffeeshops there, a contribution is made to the reduction of public nuisance and pollution. The ministerial guideline that de facto legalises cultivation for personal use in Belgium was established after 8 years of political discussions and debate in society. Also Trekt Uw Plant had to go to court two times because some prosecutors still did not find the guideline clear enough and persecuted the association, first for "cannabis possession" and after for "incitement to drug use". Both times the association was acquitted, on 26 june 2008 and 25 february 2010.

A bill that would provide Maryland medical marijuana patients with an affirmative defense to criminal marijuana possession charges passed the state Senate Thursday on a 41-6 vote.

It now heads to the House of Delegates for a floor vote. Patients could still be arrested, but not convicted, under the proposed law. The bill, Senate Bill 308, builds on the 2003 Darrel Putnam Compassionate Use Act, which allowed for a medical necessity defense, but only to limit sentences. Under the 2003 law, qualified patients could still be found guilty and stuck with a misdemeanor conviction record, but could only be fined a maximum of $100.

SB 308 amends the 2003 law so that patients with "clear and convincing evidence" that they need to use marijuana for medical reasons are no longer found guilty and fined $100, but "if the court finds that the person used or possessed marijuana because of medical necessity, the court shall enter a finding of not guilty." Unlike other medical marijuana states, patients are not protected from arrest and prosecution, but must instead defend themselves in court. Nor are there any provisions for them to grow their own medicine or buy it in dispensaries. But SB 308 does contain a provision that calls for a study group to study more comprehensive legislation for next year.

A new Harris Poll indicates that three quarters of Americans support legalization of marijuana for medical treatment (74%), with almost half saying they strongly support it (48%). Significantly fewer Americans say they oppose the legalization of medical marijuana in their state (18%), and even less are not sure (7%) or decline to answer (1%).

A bill that would have allowed Illinois farmers to get permits to grow hemp was stopped dead in a House vote last Thursday.

The bill, House Bill 1383, was defeated 28-83. The bill was sponsored by Rep. Ken Dunkin (D-Chicago), who emphasized hemp's environmental advantages and broad range of potential uses. "This is part of the new green movement across the nation," Dunkin said. "This will put Illinois ahead of most states." The measure also had the support of the Illinois Farm Bureau. "There's a potential it [industrial hemp] could be a viable specialty crop," said bureau director of state legislation Kevin Semlow. "It was grown in the state up until the '40s."

Although marijuana and hemp were criminalized federally in the 1930s, farmers were encouraged to grow hemp by the federal government during World War II, when other sources of fiber were in short supply. But after the "Hemp for Victory" interregnum, hemp prohibition returned. While hemp and hemp products may now be imported into the US, it remains illegal for farmers to grow the low-THC cannabis cultivar. Illinois imports $30 million worth of hemp a year, Dunkin said. Opponents cited the federal government's classification of hemp as a controlled substance. A state law allowing for hemp production would put the state in conflict with the federal law, they argued. "I would suggest a resolution asking the federal government to move it from Schedule One to Schedule Two so we could do more things, make the kind of distinctions between the plants (hemp and cannabis)," said Rep. Mike Fortner (R-West Chicago).