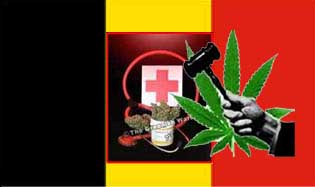 In the Cannabis Social Club members have their individual cannabis plant cultivated for personal use. Every plant should be recogniseable with a namecard. According to Bert Schoofs this would occur in three different places in Antwerp. The association claims not to be punisheable, says Schoofs. Wrong, says Devlies. "The association bases itself on a ministerial guideline of 2005. This guideline is only valid for people who possess cannabis for own use, not for persons who possess other people’s plants or for an association that carries out a collective plantation for its own members. Furthermore, facilitating other people’s drug use is punisheable as well. These facts should be persecuted", so it was heard. "But until now no plantation of the Cannabis Social Club has been discovered", Devlies added. In 2010 in total 950 cannabis plantations were discovered in Belgium.

Under the plan, synthetic cannabinoids could not be sold to people under 18, and they would face regulation of their packaging, marketing, and sales. The government is following the advice of the Expert Advisory Committee on Drugs, which reviews controlled drugs and other psychoactive substances and recommends how such substances should be classified. The committee found no basis for banning fake pot, but said it was unacceptable for the products to be available without regulation.

Americans states have responded similarly, with more than a dozen of them imposing bans before the DEA acted, and moves are afoot in other state legislatures this year to enact more bans. California, however, responded similarly to what is proposed in New Zealand, banning it only for minors. Under the New Zealand proposal, in addition to the ban on minors, sales would be banned in places where minors gather and there would be restrictions on advertising. Fake pot products would have to be sold in child-resistant containers and would have to be labeled with the synthetic cannabinoids they contain

Poland’s lower house of parliament Friday passed new legislation that gives prosecutors the option not to charge people detained with a small quantity of drugs.

An amendment to the existing law was supported by 258 MPs with 159 votes against and six abstained. The new legislation allows prosecutors to end investigations if an individual possesses drugs for personal use only and is not a drug dealer. However, it does not specify what is considered a small quantity of drugs and maintains that possession of any amount of narcotics still remains illegal. “The possession of any kind of drugs is illegal and is subject to punishment under the criminal code,” Justice minister Krzysztof Kwiatkowski stressed speaking in the Sejm on Friday. In cases involving larger amounts, the suspect is able to avoid prosecution by voluntarily agreeing to drug treatment therapy.

Polish lawmakers claim the amended law allows prosecutors to focus more on drug dealers while creating more treatment options for drug addicts.  The supporters of the new legislation point out it makes it possible to concentrate on prevention and treatment, and not punishment. But opponents said the measure lightens the load for the drug trade. 'Which mafia did you support today?' asked Beata Kampa of the Law and Justice party. At the same time, Sejm also voted to increase the maximum prison sentence for drug dealers to 12 years and for users carrying large quantities of illegal substances up to 10 years.

Lawmakers are introducing a bill to legalize medical marijuana in North Carolina.

The North Carolina Medical Cannabis Act would allow people with certain medical conditions to buy and use marijuana without penalty. The bill states, "Modern medical research has discovered beneficial uses for medical cannabis in treating or alleviating pain, nausea, and other symptoms associated with certain debilitating medical conditions." Patients with diseases including cancer, glaucoma, HIV, AIDS and hepatitis C would be allowed to use medical marijuana. The bill states that "Compassion dictates that State law should make a distinction between the medical and non-medical use of cannabis." The bill is designed to protect patients with certain medical conditions, their caretakers and doctors from arrest and prosecution.

Schools, employers and landlords will not be allowed to penalize a patient or caregivers because they use medical marijuana. Under the bill, it would be illegal to drive while under the influence of cannabis. It would also be illegal to smoke it in a school bus or any other form of public transportation, on school grounds, in any correctional facility or in public places in North Carolina. The bill claims legalizing medical marijuana would bring $250 million a year into North Carolina within four years of the legalization.

Medical marijuana has been legal in Vermont since 2004, for those with qualifying illnesses — including cancer, AIDS and multiple sclerosis — who sign up for the state’s registry.

The 2004 law allows patients to grow their own marijuana, but advocates say many find that a daunting task, leaving them with the prospect of making illegal deals for street dope. The answer, advocates say, is to legalize a small number of medical marijuana dispensaries — nonprofit operations that would grow marijuana and sell it to those on the medical marijuana registry.