Austria: Decriminalization of cannabis for personal use regardless of quantity!

Decriminalization of cannabis for personal use regardless of quantity!

Austria I: A recent court ruling highlights the impacts of the new narcotics law. Although he had harvested more than 10 kg of cannabis leaves, an Austrian man was not sentenced and the public prosecutor recently dismissed the case - with a two-year probation period. According to the new law the prosecutor must refrain from prosecution if the suspect possessed the drug exclusively for personal use. However, if the suspect is again found to possess cannabis within the probation period he is threatened by prosecution since cannabis possession is not legal under the new law.

Prior to January 1, 2008, dismissal of a case was only possible if the suspect had been in possession of a "minor quantity" of a drug. For cannabis, that quantity was, as in Germany, in the range of a few grams. The revised law now no longer considers the quantity but the personal use of a drug. In the current case where the defendant had harvested leaves from allegedly discovered hemp field there was no evidence for his intent to sell the material. The main motivation for the recent amendment to the law was, according to responsibles at the Ministry of Justice an EU decision regarding the fight against drugs. It had tightened measures against drug dealers. However, it was felt that this amendment required a stronger separation of drug dealing from personal use. 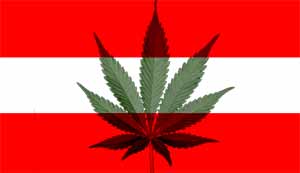 Austria: Decriminalazation of cannabis for personal use regardless of quantity!

Austrian Parliament Okays Medical Marijuana, But Only State Agency Can Grow It

Austria - The Austrian parliament approved a bill July 9 that allows for the cultivation of marijuana for medical and scientific purposes, Agence France-Presse reported. But the bill gives the exclusive right to grow marijuana to a health and food safety agency under the control of the Health Ministry. Still, it is progress, said Michael Bach, president of the Austrian pain studies association OeSG.

"Any initiative that makes it possible to develop and provide new drugs for pain therapy is welcome," he said. "Substances drawn from cannabis have been used for medical purposes more and more in the last few years," he added. It is unclear whether or how quickly this move will result in the provision of medical marijuana to patients or whether it signals a softening of official attitudes toward medical marijuana users. Currently, possession of sales of marijuana will get you six months in prison in Austria.

Switzerland- On 30 November 2008 Swiss citizen will decide in a
referendum on a ballot initiative on "a rational hemp policy providing effective youth protection". It will exempt from punishment the acquisition, possession and consumption of the psychoactive constituents of the hemp plant.

The Christian Democratic Peoples Party (CVP) recommends to their voters a rejection, the Social Democrats (SP) and the Liberal Democrats recommend voting in favor of it.

Medical Marijuana / USA - Seattle police who acted after a bicycle officer smelled marijuana seized files on nearly 600 medical marijuana patients Tuesday, the Associated Press reported. After consulting with prosecutors, police raided the Lifevine cooperative and seized 12 ounces of marijuana and a computer, as well as the patient files.

According to Martin Martinez, who heads the co-op as well as Cascadia NORML, no marijuana was being grown at the scene and no one was arrested. The patient files were on hand because Cascadia NORML was preparing ID cards and needed proof the patients were legitimate, he said.

Argentina - Recently a court of appeal (Cámara Federal) overruled the conviction of a man by a lower court, who cultivated cannabis on his balcony for personal use.

The conviction was declared unconsitutional.

London - Researchers of the University of London, UK, found synergistic effects of dronabinol (THC) and cytotoxic agents used in the treatment of leukemia.

Dronabinol sensitized leukemic cells to these cytotoxic drugs. They concluded that "a combination approach with THC and established cytotoxic agents may enhance cell death in vitro."

USA - Researchers at the University of Mississippi, USA, investigated possibilities to stabilize a heat-labile novel prodrug of THC, THC-hemiglutarate (THC-HG).

This THC compound was produced by hot-melt fabrication for systemic delivery of THC through the oral transmucosal route.