Leading a Liberal-National Party coalition government, Western Australia Premier Colin Barnett is introducing legislation this week to roll back reforms to the state's marijuana laws. Passed by an earlier Labor government in 2003, the changes decriminalized the possession of up to 30 grams of pot and allowed for the growing of up to two plants without fear of arrest and prosecution.

In a media statement Sunday and another one Monday, the "tough on crime" premier gave clear notice he was cracking down on pot and other drug offenders, and was willing to extend police powers to do so. He said he would introduce legislation to repeal the state's Cannabis Control Act of 2003 and to amend the 1981 Misuse of Drugs and Youthful Offender Act. "The Liberal-National Government is committed to tackling both the demand and supply sides of the illicit drug problem through strong law enforcement policies, education and rehabilitation," Barnett said. "Cannabis is not a harmless or soft drug. 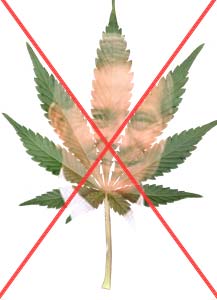 Research continues to show that cannabis can lead to a host of health and mental health problems including schizophrenia, and can be a gateway to harder drugs," he maintained, treating highly controversial and discredited claims as if they were fact. According to Premier Barnett, his legislation will: Prosecute those in possession of more than 10g of cannabis. See subsequent offenses for possession being prosecuted as criminal offences. Prosecute people for cultivating even one or two cannabis plants. Extend the ban on the sale of pot-smoking implements to minors to include everyone.

Increase the fine for selling smoking implements to $5,000 for sale to adults and $10,000 for sale to minors. Corporate entities could be fined up to five times those amounts. Barnett also wants to "reform" the Cannabis Infringement Notice Scheme (CIN), or ticketing and fines for decriminalized amounts, by replacing it with a Cannabis Intervention Requirement Scheme (CIRS) that would require anyone ticketed to attend "drug education" classes.

It would also mandate that anyone who failed to pay his fine would be prosecuted, something that has not been the case under the current law. Barnett's scheme would also allow for the criminal prosecution for marijuana possession of juveniles after two decrim tickets and adults after one. The current law has no such measures. There's more to come, Barnett promised. "The next steps will be to amend legislation to enable courts to impose a harsher sentence on dealers who sell or supply illicit drugs to children, irrespective of the location of the sale or supply," he said.

"Further amendments to the Misuse of Drugs Act 1981 will provide offenses for exposing children to harm or to the danger of serious harm from the manufacture of illegal drugs, such as amphetamines, or the unlawful cultivation of illegal hydroponically-grown plants. The government will also move to ban the sale of drug paraphernalia, including cocaine kits." But, he said Monday, he's going to start by soon introducing legislation to allow police to stop and search anyone without probable cause.

The police commissioner would designate certain "stop and search" zones with advance public notice, especially in entertainment areas. "Police will have the right to go up to anyone they wish to and introduce a stop and search power," Barnett said. "It will not be an invasive search; it will be comparable to the sort of search and screening that takes place for any citizen getting on an aeroplane."

USA: In Act of Civil Disobedience, Hemp Farmers Plant Hemp Seeds at DEA Headquarters Fresh from the Hemp Industries Association (HIA) annual convention last weekend in Washington, DC, a pair of real life farmers who want to be hemp farmers joined with hemp industry figures and spokesmen to travel across the Potomac River to DEA headquarters in Arlington, Virginia, where, in an act of civil disobedience, they took shovels to the lawn and planted hemp seeds.

Within a few minutes, they were arrested and charged with trespassing. Hoping to focus the attention of the Obama administration on halting DEA interference, North Dakota farmer Wayne Hauge, Vermont farmer Will Allen, HIA President Steve Levine, hemp-based soap producer and Vote Hemp director David Bronner, Vote Hemp communications director Adam Eidinger, and hemp clothing company owner Isaac Nichelson were arrested in the action as another dozen or so supporters and puzzled DEA employees looked on. "Who has a permit?" demanded a DEA security official. "A permit -- that's what we want from the DEA," Bronner responded.

In the British Columbia marijuana business, this year's hot, sunny summer has been hailed as the best-ever for growing pot outdoors. For the RCMP, using helicopters to search vast and densely forested regions, the bumper weed crop has led to the seizure of tens of thousands of marijuana plants.

The latest bust, announced yesterday by the Kootenay Boundary detachment of the Royal Canadian Mounted Police, had 14,130 plants taken from 88 sites in the southern central region of B.C.  around Nelson. The police estimated the street value of the drugs at nearly $80-million, based on the individual sale of 15.5-million joints.  The wholesale value was pegged at roughly $25-million.

Six people were arrested in the two separate investigations, according to Inspector Nick Romanchuk. The RCMP on Vancouver Island have also been busy, seizing about 29,000 plants this year in various busts, a quarter more than the 23,000 in 2008.  One study has shown that nearly half of the pot on Vancouver Island is grown outdoors.

While B.C.  has a reputation as Canada's pot paradise, the country's most populous province, Ontario, is home to an equally big bud business, estimates suggest. Last September, Ontario Provincial Police trumpeted the largest pot bust in Canadian history when they seized 40,000 plants in a cornfield near Pembroke in the eastern area of the province.

The West African nation of Liberia, still struggling to emerge from years of bloody civil war, is now turning its attention to the war on drugs. Voice of America reported Wednesday that Liberian lawmakers have approved tough new anti-drug measures aimed not only at South American and Nigerian drug traffickers, but also at the country's own marijuana farmers. Under the old law, drug trafficking offenses typically earned between five and 10 years in prison, but now the minimum sentence has quintupled.

"If you are arrested and sent to court and convicted, you could be sentenced to jail for not less than 25 years and not more than 60 years," James Jelah, head of the Liberian DEA, told VOA. Under the new law, drug offenders will no longer be eligible for bail while awaiting trial. Police and prosecutors have also been granted new asset forfeiture powers. The hard line comes as Liberia and other weak West African nations grapple with cocaine trafficking.

The poorly policed countries provide an enticing stopover point for South American loads on their way to the European market. But like neighboring countries, Liberia also has a substantial -- and militant -- marijuana farming population. "The DEA is trying to uproot the marijuana farms," Jelah said. "And as a result, they were attacked by the townspeople. They put a blockade.

They attacked them. Some shot single-barrel guns in the air. People came with machetes and sticks and they started beating up the DEA men. These guys had to jump in the bush." In a country with 80% unemployment, marijuana production is a lucrative economic activity. So is the retail drug trade.

One young Liberian told VOA the drug trade wasn't going away no matter what the government did. "I sell it to foreigners, and I also sell it to Liberians," he said. "This is a money-making business. I do not care how much the government can do, this is our business. This is how we survive. So we cannot just do without drugs." But the Liberian government is reading from the US drug war playbook.