Australia -  The state government of South Australia has made the possession of lights, reflectors, and associated equipment that can be used for growing marijuana a criminal offense punishable by up to two years in prison. Also included in the list of proscribed horticultural items are carbon filters, evaporators, heating tools, stirrers, funnels, and flasks.

Under the new statute, people caught in possession of such items will have to prove they have a legitimate reason for having them or face criminal penalties. The move is the latest effort by the state government to crack down on marijuana cultivation there. It also reflects the peculiar Australian obsession with "hydroponic" marijuana, which in the land Down Under is widely considered to be somehow different and more dangerous than marijuana grown by other means. "These are the tools of the lucrative but deadly drug trade," said state Attorney General Michael Atkinson in remarks reported by Adelaide Now. "They're used in sophisticated set-ups and two-bit backyard operations alike. This government will prosecute anyone who has these illegal drug-making devices -- unless they can give a good explanation." 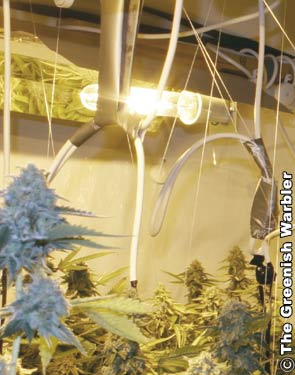 Atkinson scoffed at the notion anyone would be using such equipment for anything other than growing pot. "With the amount of hydroponic equipment being sold, you would think South Australia was the hydroponic tomato capital of Australia," he said. "Alas, we do not produce as many hydroponic tomatoes as hydroponic cannabis." Atkinson said banning such equipment was the best way to attack the drug trade, which he characterized as dominated by biker gangs. "It's no secret that those who have these items aren't planning to bake biscuits for the Girl Guides," he said. The move will "make a big dent" against pot growing, he promised.

USA  -   Most researchers agree that the value of the U.S. marijuana crop has increased sharply since the mid-nineties, as California and twelve other states have passed medical-marijuana laws.

USA: police cannot arrest passengers for being in a car that smells of marijuana.

USA  -   The Washington Supreme Court ruled July 17 that police cannot arrest passengers simply for being in a car that smells of marijuana. The unanimous decision overturned a 29-year-old precedent allowing police to search or arrest passengers if they smelled pot near a car.

The case, State v. Grande, began with a 2006 traffic stop in Skagit County. Driver Lacee Hurley and passenger Jeremy Grande were arrested by a state trooper during a traffic stop after he smelled pot coming from their car. The trooper searched the pair, finding a pipe and a small amount of pot on Grande. Both were charged with drug offenses. At a pretrial hearing, Grande's judge ruled there was no specific probable cause for his arrest and suppressed the evidence. But the Skagit County Superior Court overturned that ruling, citing a 1979 appellate court ruling saying the smell of pot smoke coming from a car was probable cause to arrest all the occupants.

The new ruling won quick praise from drug reformers and civil libertarians. "As a general statement, it's a step back from the direction that our government has been going as we're veering into a sort of surveillance society," Alison Holcomb of the American Civil Liberties Union's Washington chapter told the Seattle Post-Intelligencer. "It strikes me as refreshing that the court has reaffirmed the values that our constitution calls for."

Italy - Whole Plant Better Than Isolated Components in Pain Relief, Italian Study Finds.  Scientists at the University of Milan have published a study finding that whole-plant marijuana extracts provide better relief for neuropathic pain than isolated components of the plant, like THC alone.

The research is an intervention in the ongoing debate between medical marijuana supporters and herbal and alternative medicine advocates on one side and the US government, some politicians, and the pharmaceuticalized medicine industry on the other. "The use of a standardized extract of Cannabis sativa... evoked a total relief of thermal hyperalgesia, in an experimental model of neuropathic pain,... ameliorating the effect of single cannabinoids," the investigators reported.

"Collectively, these findings strongly support the idea that the combination of cannabinoid and non-cannabinoid compounds, as present in extracts, provide significant advantages... compared with pure cannabinoids alone." Congressional drug warriors like Rep. Mark Souder (R-IN) have long argued that marijuana is not a medicine and that any medicinal compounds in the plant should be isolated or synthesized, as is the case with Marinol, which contains one of the hundreds of cannabinoids found in the plant. The DEA takes a similar approach. But this latest research only adds to the evidence that that position is mistaken.