Attempt to roll the world`s longest joint has been thwarted

Attempt to roll the world`s longest joint has been thwarted

Police in France have thwarted an attempt by a group of marijuana smokers to roll the world's longest joint by seizing a work-in-progress measuring 80 centimetres (32 inches) in length. "At some point, these young people had wanted to craft a joint of 1.12 metres to beat the world record in the discipline and get it officially registered," said a police officer in eastern France. "We don't know who had the idea. Sometimes ideas are created in an astonishing way," he said. During an investigation targeting a group of four smokers in the eastern Vosges area of France, police discovered the giant joint containing 70 grams of marijuana resin. It had not been finished because of a lack of tobacco. One of the smokers of adult age is to appear before a court charged with drug use on October 19. Two minors will appear before a juveniles court on October 6. 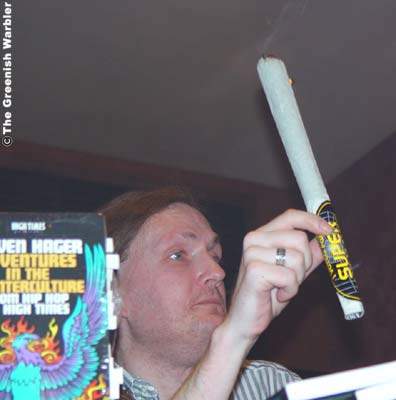 "Not the world's longest joint, but for sure also a tremendous examplar..."

A surprise Supreme Court of Canada ruling has made Marc Emery's extradition to
the US much more difficult. Background: The United States is currently attempting to extradite Marc Emery and two of his employees, Greg Williams and Michelle Rainey – the so-called Vancouver Three - to face a life sentence in US prison for selling cannabis seeds. Emery is known as the (Canadian) “Prince of Pot” and former proprietor of emeryseeds.com. Canada's highest bench has made it more difficult now to remove from Canada accused individuals such as Emery without real proof that they are guilty of the offences charged. In a unanimous decision written by Chief Justice Beverley McLachlin, the court said judges must weigh the prosecution's case and decide whether it could result in a guilty verdict in Canada. That could prove problematic in Emery's case because authorities here have decided against indicting him for selling marijuana seeds - the source of the alleged U.S. drug offence and the activity that produced the money at the heart of the laundering charge. In the meantime, Emery has married his long-time right-hand woman at Cannabis Culture Magazine, Jodie Joanna Giesz-Ramsay, at the end of July.

Sixty-two percent of Montana (a US federal state) voters approved the state's medical cannabis law in 2004. 220 patients are currently registered with the Department of Public Health and Human Services to use cannabis. One year ago it have been 119 patients. Montana also has 100 physicians registered; doctors who have recommended cannabis to a patient. Under Montana law, a registered patient or caregiver can grow six cannabis plants or possess one ounce of usable cannabis.

Health Canada is the department of the government of Canada with responsibility for national public health. Health Canada is now seeking bids from pot suppliers: People who want to grow pot for the federal government may soon get the chance. Health Canada's five-year, $5.75-million contract with its current supplier of medicinal marijuana, Prairie Plant Systems, appears to be winding down and the department is preparing to seek proposals from all potential suppliers. "Public Works and Government Services Canada continues to negotiate with Prairie Plant Systems to ensure an uninterrupted supply of marijuana for research and for authorized users while a (request for proposal) process is carried out to identify a long-term supplier", said Health Canada spokeswoman Carole Saindon. As it does for a wide range of contracts - from building maintenance to military supplies - the government will invite interested companies and individuals to submit bids for a pot-growing contract. It will then try to choose the one offering top quality and value for taxpayers. The process could result in Prairie Plant Systems being selected again, or some other supplier could get the nod. Some who use the current pot supply are urging the government to shop around. "What we need to move beyond is the idea of a single monopoly producer of medical cannabis," Philippe Lucas, a medicinal pot user and spokesman for the group Canadians for Safe Access, said from Victoria, B.C. People on medicinal marijuana respond better to different strains of the drug, Lucas said, and want the right to choose from a selection. About 280 patients currently receive the government pot, which Prairie Plant Systems grows in an unused section of a hard-rock mine near Flin Flon, Man. Most patients buy 30-gram bags of ground plant buds for $150.

In 1984 I read an article called ' It's an odd world' that reported that a dozen Dutch nationals had succeeded in rolling a joint 4.48 metres long on 10th November 1982. That record was later beaten by a Swiss, Philibert Roux who rolled a 7.93 metre joint with 100 gms of cannabis. Around the same time a Western Australian business had won the America's Cup Yacht race and the circus was coming to my town. I started making plans to roll a 12 Metre Joint with 1kg of cannabis. I also built a wooden replica yacht, my Trojan Horse, so I could launch my joint in public on a oceanside park over looking the America's Cup course in the hope that the world media would video it and broadcast it world wide in prime time television which they did. For nights it was on America's World News as the bizarre bit of the Cup.The event is on YouTube 12 Metre Joint and a slideshow, Google The Story of Paul Pot and the 12 Metre Joint. FREE THE WEED , Paul Pot.