Argentine: Good news - A court of appeal in Buenos Aires declared unconstitutional the prohibition of the possession of drugs for personal use and acquitted two defendants from illegal possession of small amounts of cannabis and ecstasy. The Argentinean Supreme Court will review the case. According to a newspaper report the government supports decriminalisation of drug use.

Italy: Bad news - The plenary session of the italian high Corte di Cassazione ruled once and for all on April 24th that growing cannabis for personal use is a major penal crime, and cannot be considered anymore as equivalent to possess for personal consumption. A refutation of previous sentences from single sessions of the same Court.
Regardless the number of plants and the amount of Thc contained, or even in its absence, the penalty according to the current legislation is possibly 6 to 20 years of jail.
In tune with an increasing anti-cannabis emergency campaign on all media, the 'new' govt. will now enforce a zero tolerance application of the act they themselves wrote a couple of years ago. Some of them are already questioning if, established the unlawfulness of growing cannabis, it is possible to continue not to persecute consumption tout-court. Growshops will certainly be the target to start with.
Some others want to ban even cannabinoid medicines, as "they haven't any possible therapeutic value" and are a communist conspiracy aimed at our youths.
Parliamentary approval of any further act will become just a quick and useless formality, due to the vast majority of seats in both chambers, the absence of even a single leftist representative and the hold on both parliamentary presidencies. Only grass-root action from civil society is still possible. The next five years promise tears and blood. 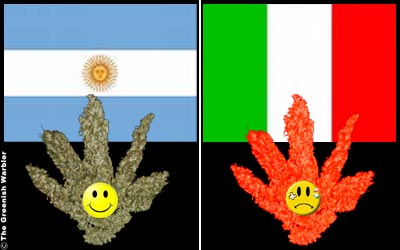 Good and bad news from Argentine and Italy.

The Netherlands: The Dutch government has passed a law banning magic mushrooms. The law also makes possession and use of magic mushrooms illegal. Now the
law needs to pass parliament. After parliament has approved the law, it will
be 4 weeks before mushroom users risk jail time for possession.

Science: Researchers of the University of Oxford, UK, investigated brain structures of heavy cannabis users who started their use at an early age. They found abnormalities in the corpus callosum, which may underlie cognitive consequences of long term heavy cannabis use by young people. The corpus callosum connects the left and right hemisphere of the brain. (Source: Arnone D, et al.
Neuroimage 2008 Mar 14).

Science: Anandamide effective against impotence in diabetic rats. According to a study by the Department of Pharmacology at the University of Tehran, Iran, the endocannabinoid anandamide improved the relaxation of the spongy tissue (corpus cavernosum) of the penis in diabetic rats. The animals were killed and their spongy bodies were isolated. In a solution the spongy bodies were treated with various substances. Compared to the spongy tissue of healthy animals the ability of the tissue of diabetic rats to relax when exposed to an electric field was impaired. Both the administration of anandamide and the administration of arginine improved that ability to relax. The combined use of both substances resulted in considerably improved relaxation.
Spain/Austria: Sativex is now available all over Spain under the administrative status of compassionate use when other medications have failed. This is a consequence of the results of a study with Sativex in Catalonia. For a short time, Sativex is also available on prescription in Austria.

Cyprus: ICRS conference. On 1-4 May 2008 the ICRS (International Cannabinoid Research Society) will hold a conference on the therapeutic potential of
cannabinoids in Cyprus. The program with abstracts is available at:
http://www.cannabinoidsociety.org/SYMPOSIUM.2008/2008.Limass
ol/Program/2008.Limassol.Satellite.Program.

Science: Cannabis was effective in the treatment of neuropathic pain in clinical study. In a placebo-controlled, clinical study with 38 patients (mean age: 46 years) at the University of California, USA, smoking of cannabis was effective in reducing neuropathic pain of different origin (diabetes, spinal cord injury, multiple sclerosis and other causes).
Participants received either cannabis of two different strengths (3.5 per cent or 7 per cent) or placebo cannabis without THC at three different occasions, which were separated by at least three days. In each session, patients took the same number of puffs from the cannabis cigarette, following a standardized procedure to ensure uniformity of the dose received at each strength. All participants had experience with cannabis, but discontinued the administration of cannabis or THC (Marinol) 30 days before start of the study. 31 patients used opiates and continued their use
throughout the study. Both doses of cannabis significantly reduced pain and this decline remained for several hours. There was no significant difference in pain reduction between the two cannabis varieties. Researchers noted, that "psychoactive effects were minimal and well-tolerated, but neuropsychological impairment was problematic, particularly with the higher concentration of study medication."