Argentina: A Thousand March for Marijuana in Buenos Aires

About a thousand people took to the streets of Buenos Aires on December 18 to celebrate a year of marijuana activism and call for the right to grow their own plants. The march, led by student groups from around the country, ended at the Argentine Congress building, where speakers addressed the marchers. 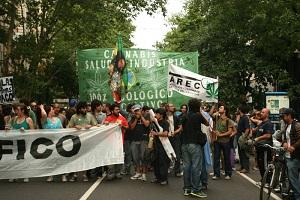 Argentina: A Thousand March for Marijuana in Buenos Aires.

We present two dozen+ photos from the day here, courtesy Argentine activists. Marching behind a banner saying "No to the Drug Traffic," the protestors criticized drug prohibition as fueling violent drug trafficking organizations. Another banner called for "An end to ignorance, the right to grow your own, and education for responsible consumption." The Argentine courts decriminalized marijuana possession for personal use last year, but cultivation remains a criminal offense. The Buenos Aires demonstrators want to see cultivation legalized as well.

A woman who's been waiting five months for an updated license to use medical marijuana says the situation for patients is getting worse. Health Canada issues medical marijuana licenses to people with debilitating illnesses and prescriptions from their doctors.

Almost 5,000 Canadians have licenses to carry medical marijuana and just over 3,500 have a license to grow it. A spokesman for Health Canada says the department streamlined its process and is now hitting its eight to 10 week processing time target.

USA: California Supreme Court Okays Text Message Searches in Drug Arrests
The California Supreme Court ruled Monday that police can search text messages on the cell phones of people they arrest without obtaining a search warrant. Citing US Supreme Court precedent from the 1970s, the court held that reviewing cell phone text messages was a valid search incidental to arrest. The ruling came in California v. Diaz, in which Ventura County resident Gregory Diaz was arrested for selling Ecstasy to an undercover informant.

Sheriff's deputies seized Diaz' cell phone along with six tabs of the drug. An hour and a half after the arrest, a detective without a search warrant looked at the phone' text message folders and found a coded message referring to Ecstasy sales. When faced with the incriminating text message, Diaz admitted to doing the drug deal.

He pleaded guilty to transporting a controlled substance, but reserved his right to appeal. He was sentenced to probation and did appeal the lawfulness of the cell phone search. In a 5-2 decision, the state high court majority held that the search was allowable under US Supreme Court rulings that permitted the warrantless searches of personal property "immediately associated" with the arrested person, such as clothing or cigarette packs. Writing for the majority, Justice Ming Chin held that the cell phone was personal property, that it was immediately associated with Diaz, and that the search was therefore valid.

Leaders of both political parties have already expressed an unwillingness to move to legalize marijuana for medicinal purposes, but that won’t stop advocates of medical marijuana from lobbying for the change when the legislature convenes in January. One of those in favor of legalization, Jimmy Morrison, smokes marijuana a couple of times a day to treat his bi-polar disorder.

The University of Iowa student and business owner says he tried prescription medication but it left him numb and unable to focus on his video production company. “I could stop breaking the law that sounds great but the reality of it is there’s a reason I’m risking going to jail. It’s because it works, because the cost is too high to quit,” Morrison says. Morrison is 24 and says he’s taken risks to get marijuana, as last year he was mugged in the Twin Cities while trying to buy it.