An American stockbroker has one of the world’s most prolific cannabis smokers – thanks to a constant supply of the drug to treat a rare bone disease.  Fort Lauderdale stockbroker Irvin Rosenfeld will tomorrow smoke his 115,000th joint  - and it’s all legal.

Rosenfeld suffers from multiple congenital cartilaginous exostoses, which causes severe pain which can be alleviated by the drug. He has been receiving 300 joints of the drug every 25 days for the past 27 years, NBC Miami reported. ‘I would be bedridden without it, if I would even be alive,’ he insisted. ‘I shouldn’t have been alive and I’m still alive, I take no other medicines, I’m in great shape because of the cannabis. It’s just sad because the medicine’s there.’

Rosenfeld says he does not get ‘high’ on the drug, nor does it make him hungry. He said: ‘No munchies, no munchies, nothing other people get. A lot of patients don’t get high.’ He added: ‘There are people who have been raised to think it’s the devil’s work, they’ll always be against it. ‘If you truly think marijuana’s as bad as you think it is, explain me.’ 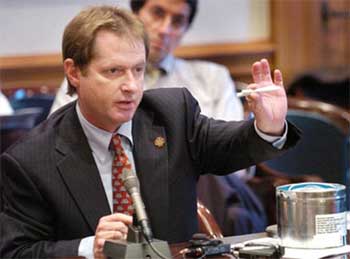 UK: Prof Nutt pleads for Dutch cannabis model to be applied in the UK

Sacked government drugs adviser Prof David Nutt has called for a Royal Commission to investigate whether cannabis should be decriminalised. Prof Nutt told the BBC the possibility of allowing Dutch-style cannabis cafes should be "explored".

But his call comes as another academic is due to publish a study highlighting the possible links between the drug and schizophrenia. "The more you smoke, the higher the risk," Prof Robin Murray told the BBC. Prof Nutt told Radio 4's The Report that a Royal Commission on decriminalising the use of cannabis was a "sensible" idea and it could have "big health benefits."

He added: "We've seen some countries like Portugal make real progress in terms of drug-related crime and drug-related harms by decriminalising drugs of personal use. "You could make a moral position that why should people be imprisoned for possessing something that effectively will only harm themselves?" Prof Nutt said: "I certainly am interested in the idea that we might de-penalise possession and even allow the Dutch model for cannabis - the coffee shops - which could potentially have many benefits.

"I think it's perfectly sensible to think about the Dutch model for cannabis and explore whether that might be a tenable way of allowing young people to get an intoxicant which is safer than alcohol, and which they could then use in a controlled, safe environment." He suggested that "trial towns" might be set up for an experiment.

Mary Beth Buchanan, easily the nastiest federal prosecutor in the nation, has finally resigned her post. Yet, even as lovers of justice across the country celebrate her long-overdue departure (and pray she won't run for elected office), Buchanan has managed to turn our stomachs for what will hopefully be the last time: On her last day in office, Buchanan says her only regret during her tenure was accepting a plea from Tommy Chong.

Such pure arrogance is really something to behold. Every legal textbook in the country should display her picture beside the term "malicious prosecution," as the railroading of Tommy Chong is a mere footnote within a career defined by gratuitous excesses. Of course, Tommy was amused to hear that Buchanan still holds a grudge against him.

The feeling is mutual: "I'm honored to be Mary Beth's only regret. Now does she regret going after me? Or does she regret that I never got enough time? I tend to think she wishes she'd never heard my name. I have become her legacy. Mary Beth Loose Cannon is now looking for a job. She blew her last job busting me. Karma is so sweet! She's looking for a work while Cheech and I start our second multi-million dollar tour thanks to the publicity she created for us! Thank you Mary Beth - may you find peace and happiness in your search for your soul."