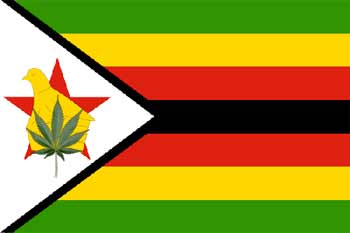 A member of parliament (MP) from Zimbabwe's ruling ZANU-PF (Zimbabwean African National Union-Patriotic Front) has called for the legalization of marijuana cultivation for medicinal reasons and/or for export. That call was rejected by the country's agriculture minister. Uzumba MP Simbaneuta Mudarika suggested that marijuana be grown legally in "remote areas" as medicine and to export to countries where it is legal. According to New Zimbabwe News, the notion prompted prolonged laughter and uproar in the chamber. "I would like to know from the Minister the national policy with regards to creating export processing zones (EPZ) in remote areas," said Mudarikwa. "The reason for creating the EPZs in those remote areas is so that we can grow marijuana. Other countries like California and Norway have legalized it," he added. Legislation has been filed to legalize medical marijuana for people with debilitating conditions, such as cancer. House Bill 2330 would provide for the registration and operations of not-for-profit compassion centers, which would have the authority to possess, cultivate, manufacture and dispense medical marijuana. Patients would have to have a doctor’s recommendation and a license from the Kansas Department of Health and Environment. The license would permit them to possess up to six ounces of medical marijuana.

The New York City Police Department arrested nearly 140 people a day for low-level marijuana possession offenses in 2010, according to recently released figures from the New York Division of Criminal Justice. Arrests totaled 50,383 last year, accounting for more than 6% of all small-time pot busts nationwide. While for the past 20 years, New York City has had high marijuana possession arrest rates, last year was the sixth year in a row that the numbers increased. Last year's arrest totals marked a 69% increase over the 29,752 pot possession arrests in 2005. Since Mayor Michael Bloomberg took office in 2002, more than 350,000 people have been arrested for misdemeanor pot possession in the Big Apple. The dramatic increase in arrests comes even as marijuana usage rates have declined from the 1980 peak, according to US government data. The arrests suggest that the NYPD has quietly made small-time pot busts its top law enforcement priority. Although the Drug Policy Alliance (DPA) put out a press release with the numbers a week ago, and the story received some play in New York City media, neither Mayor Bloomberg nor the NYPD have deigned to comment.

USA: Missouri veteran says he should be allowed to grow pot instead of becoming a morphine addict

St. CHARLES, Missouri - A wounded Missouri veteran is gearing up for a battle he says he shouldn’t have to fight. But this battle is in a courtroom. Prosecutors have slapped Ken Unger with a felony charge of growing marijuana in his home. Unger says it’s strictly for medicinal use to ease chronic pain cause by an accident he had in 1983 while on a tour of duty. But he doesn’t deny the charges. “Yes I was growing marijuana, and I was growing it for my own personal consumption,” he said. Unger was prescribed morphine to control his pain, which he says he’s tired of. “I feel like I’m totally trapped,” Unger said. “I’m not allowed to do anything for pain relief other than be a morphine addict, and I don’t want to be a morphine addict.” If convicted, Unger could face five to 15 years behind bars. A hearing is scheduled for March

Early next month, the state Health Department is poised to select from one to three proposals for dispensaries that will sell medical marijuana and related products to patients in the growing medical marijuana program. JoAnne Leppanen, executive director of the Rhode Island Patient Advocacy Coalition, and others seeking to open the centers have varying views on whether it’s financially feasible for the state to have three dispensaries. On Tuesday, there were 3,239 patients and 2,039 licensed caregivers, or medical marijuana growers, in the program. Many of the patients also have caregiver licenses, meaning that they grow their own medical cannabis to deal with chronic pain, nausea and other medical ailments. But just about everyone in the industry predicts that the establishment of one, two or three dispensaries will lead to an immediate surge in the number of patients, who must get approval from the Health Department to use medical marijuana for.