Afghanistan: Other than taking pot shots at Taliban soldiers, forests of massive marijuana plants are giving Canadian soldiers few options. Afghanistan is known for its poppy trade. But huge fields of marijuana plants, ranging from six to 12 feet high, are causing unique problems. "When we drive through them on a light armoured vehicle, the plants are taller than a vehicle itself," explained Gen. Rick Hillier yesterday. Taliban soldiers have been hiding in the forests, then jumping out to fire rocket-propelled grenades at vehicles. Because the plants retain energy, the insurgents can't be detected. "They pop back in and it's very difficult for our thermal sights to see inside of (the forests). Most other times we can see the individuals and track them down," said Hillier. Another problem is the plants retain water. When the military tried to clear the forests, they found the plants wouldn't burn. They even tried various substances such as diesel fuel, to no avail. The soldiers did have some success with one forest, though. "A few plants at the edge of the forest were slightly drier and brown. They caught fire and burnt for a while," said Hillier. "Unfortunately, they had one of our rifle sections of 10 men slightly down-wind from that. We couldn't keep up with the orders for munchies." 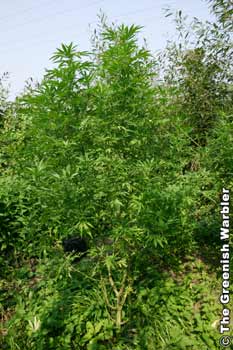 Afghanistan: Soldiers burnt giant marijuana plants and got the munchies

European Union: The annual report from the European Monitoring Centre for Drugs and
Drug Addiction shows that the UK's drug problem among young teenagers is far worse than in any other EU country. The research shows that 13% of British schoolchildren say they first tried cannabis before they were 13. This is much higher than any other European country – it compares with 8% in the Netherlands and Ireland - and is more than three times the EU average. In general, Cannabis remains the most widely used drug in Europe, but cocaine abuse rose sharply last year despite record amounts of the drug being seized, an annual report by the EU drugs agency said Thursday.

Canada: Ottawa proposes mandatory jail for growers and dealers. The Conservative government unveiled historic legislation Tuesday to create the first mandatory prison terms in Canada for people convicted of trafficking illicit drugs. The proposed changes are the newest chapter in the Harper government's crackdown on crime, which includes bills before Parliament to toughen rules for repeat violent offenders, to keep
accused young offenders in jail before their trials, and now to impose automatic prison penalties on serious drug offenders. Canada's Controlled Drugs and Substances Act currently contains no mandatory prison sentences for anyone convicted under the act.
Judges use their own discretion about whether to send drug pushers and growers to jail. However, the new bill proposes:

- a two-year mandatory term for dealing cocaine, heroin or
methamphetamines to young people, or for dealing them near a school
or any place young people are known to frequent;

- a mandatory six-month sentence for growing as little as one
marijuana plant, for the purposes of trafficking;

- a two-year mandatory term for running a marijuana grow operation of
at least 500 plants;

- a doubling of the maximum prison term for cannabis production from
seven to 14 years.


Scotland: Has Scotland become a haven for drug-running Triad gangs? Detective Chief Superintendent Stevie Whitelock, head of intelligence at Strathclyde Police, said: "Organised criminals have turned Scotland into a cannabis greenhouse." Up to UKP1billion of the drug is being cultivated every year in houses
and warehouses converted into drug farms by a large-scale organised crime gang linked to south-east Asia. The farms are manned by illegal immigrants, locked in properties 24
hours a day, in temperatures exceeding 38C. In the past 12 months, 33,000 plants worth UKP 40 million have been seized. But police say this is just the tip of the iceberg.
They believe much of the cannabis is being exported overseas by the
Chinese-Vietnamese crime group. Law enforcement sources also believe the profits are being channelled back to south-east Asia where the cash is laundered in tourism. Mr Whitelock said: "In addition to being a consumer market for drugs, Scotland has become a drug producer." In the past 12 months, 61 cannabis factories have been busted in
Strathclyde alone, with 70 in Scotland in total, resulting in 51 arrests. But there is no evidence of the cannabis being sold on the streets of
Scotland. Mr Whitelock said: "It has been sent elsewhere. We are producing cannabis for the UK, Europe and probably further a field. "In effect, organised crime groups are using Scotland as a greenhouse." The Scots-grown cannabis contains almost seven times more of the dangerous chemical THC than foreign imports.
And while seizures are up, it is feared huge quantities - up to UKP1billion a year - are exported undiscovered. The industry has shown a remarkable growth since a cannabis farm was found in the Kilmarnock area last year. Within a short time, there were more busts in Lanarkshire, Paisley and Glasgow. The farms are often in quiet suburban areas, typically on new housing estates. Mr Whitelock said: "They are very shrewd. They are using new houses in suburban areas where there's often no sense of neighbourhood. "They rent properties for six months, pay cash up front to the landlord and invest UKP20 to UKP30,000 on equipment. "Then they bring in the Vietnamese farmers. "Some know what they're coming for. Others come here thinking they have a promise of a legitimate job and end up being modern-day slaves."